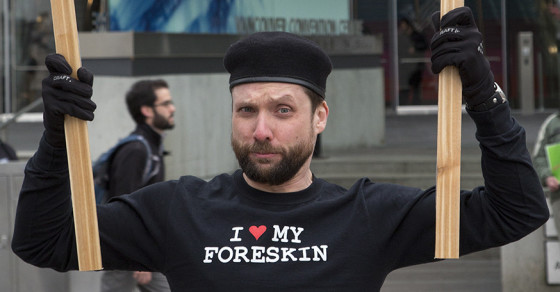 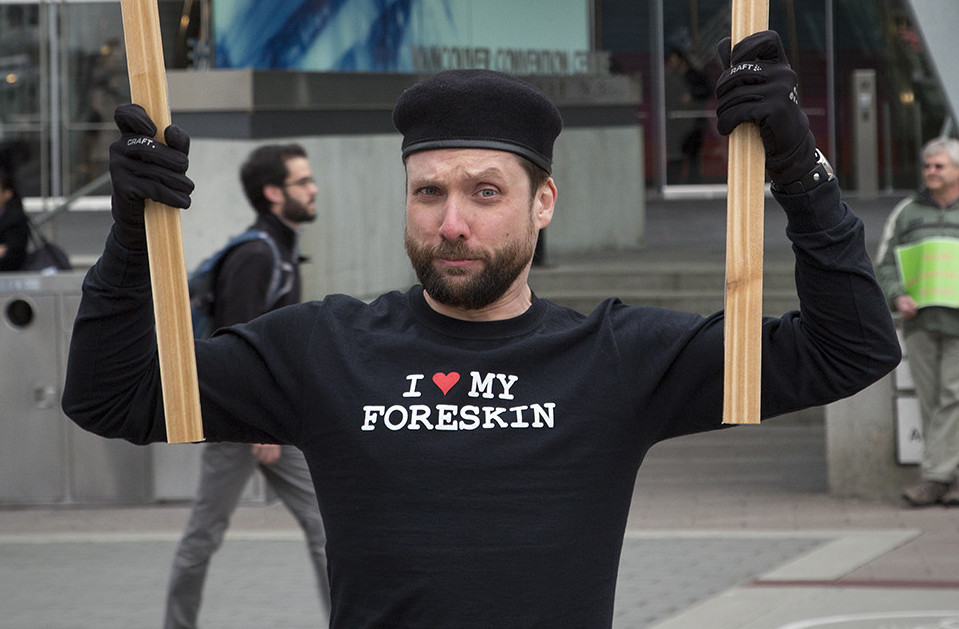 “Bill Gates: Foreskin Enemy #1.” This was the slogan on one of the picket signs outside TED at the Vancouver Convention Centre Tuesday night, where inside Gates and his wife, Melinda, were discussing their foundation’s efforts to combat communicable diseases in developing countries. The demonstrators were there to protest the Bill & Melinda Gates Foundation’s funding of voluntary male circumcision programs in Sub-Saharan Africa, designed to reduce the transmission of HIV. The campaigners believe the programs do little to cut infection rates.

“Circumcision doesn’t work, and what’s happening with Bill and Melinda Gates now is that they are mutilating literally millions of men and boys, and it’s not going to help,” says Glen Callender, founder of the Canadian Foreskin Awareness Project (aka CAN-FAP). “Bill Gates is directly responsible for more unnecessary circumcisions than any other single individual on the planet. He is behind the destruction of more foreskins than any other individual. That is why he’s foreskin enemy number one.”

“I love my foreskin. It’s right there on my T-shirt,” Glen Callender says.
(James Loewen)

The World Health Organization maintains that there is “compelling evidence that male circumcision reduces the risk of heterosexually acquired HIV infection in men by approximately 60 percent,” research that underpins the Gates’ plans. Callender, however, says the studies that informed the research were not well-executed. This is an opinion shared by some within the scientific community who posit that circumcision programs can increase the risk of transmission by taking “resources away from more effective, less expensive, less invasive alternatives.” Though the Gates group does advocate for a multipronged approach to fight HIV infection, Callender believes the circumcision programs are a product of Bill Gates’ cultural ignorance.

“I’m not saying that Bill Gates is malicious in his intent,” he says. “I don’t know if he is circumcised or not, but he was born in 1955 as a white male in the United States, so the chances of him having it are very small, and the culture is a circumcising culture. He means well, but he’s failed to notice his cultural bias. …It feels good to export your culture to other places.”

Callender is very passionate about foreskins. He says there is a difference between being anti-circumcision and pro-foreskin and he’s firmly in the latter camp, fighting instead for a man’s right to choose—a sentiment he believes is slowly taking on greater importance in society. “I’m not against circumcision. I’m against circumcision being forced on people without their consent,” he says. “That is the focal point of the entire movement—that people have a right to consent to the modification of their bodies, to the removal of genital tissue, pleasurable functional tissue. Because the foreskin is not inconsequential, it has many functions that contribute to sex and the penis, and all those are taken away when you are circumcised.”

This is why he formed CAN-FAP—a playful masturbation reference. The group seeks to educate the public about foreskins by participating in rallies to bring attention to the cause. The most recent protest involved Oprah Winfrey’s endorsement of SkinMedica, an anti-aging cream containing cells grown from samples of genital skin. Then there’s the Foreskin Awareness Booth, a family-friendly demonstration held at street festivals and gay pride celebrations where Callender shows groups of up to 25 people his uncircumcised penis, highlighting what it can do and how to clean it, while educating the audience on the dangers of circumcision—with a few jokes thrown in for good measure.

Though he doesn’t offer hands-on demos in the booth, he is a proponent of what he calls “foregasms”—bringing yourself to climax using only your foreskin—and will be releasing some instructional videos for guys on his site in coming weeks. “We’ve been conditioned to think that the head of the penis is where the action is,” he says, adding he was inspired by medical studies that highlighted the various nerves of the penis. “I thought to myself, if nerves are concentrated in these areas of my inner foreskin, then if I isolate them without stimulating other parts of my penis, interesting things should happen.”

But the movement, he says, isn’t just about sex. Callender and other pro-foreskin activists want parents to question their motivations for circumcising their children and consider holding off until the kids are old enough to make their own choice. “The ultimate goal of the Canadian Foreskin Awareness Project, as the genital autonomy movement in general, is to protect the rights of all children—male, female and intersex—to grow up with whole, intact genitals, and have the right to decide for themselves if parts of their genitals get modified or cut off,” he says. “That is the end game.”