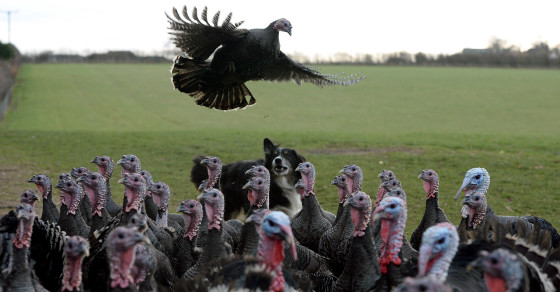 A turkey flock in Kingsbury County, South Dakota is the 11th confirmed case of the H5N2 avian influenza virus (bird ‘flu) in an outbreak spanning two states. The infection, which affected 34,000 turkeys, was confirmed by the US Department of Agriculture and has been categorized as “highly pathogenic.” The outbreak has hit 11 properties and affected more than 725,000 birds since the end of March.

Dr. Henry L. Niman, founder and president of Recombinomics, has been maintaining an up-to-date interactive Google Map which tracks confirmed cases of the H5N2 virus within the US. According to the map, there have been 26 total confirmed cases since 2014. A statewide outbreak in Minnesota or South Dakota could have an impact on the Thanksgiving turkey flock, but with Minessota alone producing 45 million turkeys a year, the outbreak still represents a drop in a giant turkey-flavored ocean. The most recently confirmed case affected a commercial turkey flock of 310,000 in Meeker County, Minnesota. The farm, owned by Jennie-O-Turkey but operated by independent farmers, was the first company-owned facility to test positive for the virus.

More 1 In 5 Thanksgiving Turkeys Come From This State

The USDA’s protocol for managing bird ‘flu outbreaks includes five steps: quarantining the movement of the affected birds and equipment, euthanizing the affected birds, monitoring the larger surrounding area, disinfecting the location and ultimately testing the area for any leftover traces, if any. According to the USDA, the likelihood of human contraction is low and at this current time no human infection cases have been reported. The USDA reiterated the correct method of cooking poultry and eggs to an internal temperature of 165 degrees Fahrenheit in order ensure the killing of bacteria and viruses. People should also refrain from physically interacting with sick or dead birds or remember to wash hands with soap and water and change clothes if contact does occur.

Where Do Your Thanksgiving Turkeys Come From? (Vocativ)
Drunk Birds Are Being Put In Jail to Dry Out (Vocativ)