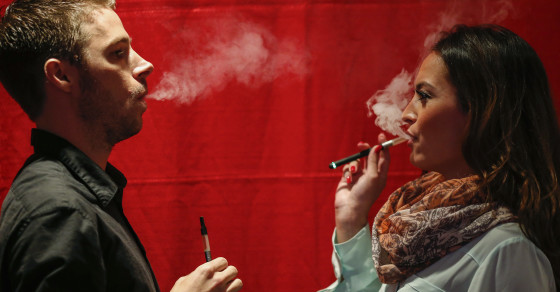 E-Cig Ads May Cause People To Crave Real Cigarettes

Watching actors puff vapor out of e-cigarettes on TV might be making people crave the real thing, according to a recent study conducted by researchers at the University of Pennsylvania.

Smokers who watched the ads wanted cigarettes more and were more likely to smoke during the study. Meanwhile, former smokers reported that they felt less confident that they could resist having a cigarette. Even though e-cigs are usually marketed as a healthy alternative, these ad campaigns, which estimates put at over $1.8 million in 2014, might be having a negative impact on smokers and making the federal ban on tobacco ads on TV ineffective.

The researchers spent a year collecting e-cig advertisements on the Internet, ending up with 20 in total, and recruited 900 current and ex smokers. About 35 percent of daily smokers reported smoking a cigarette during the experiment compared to 22 percent who listened to the ad’s audio and 23 percent who didn’t see or hear any ads.