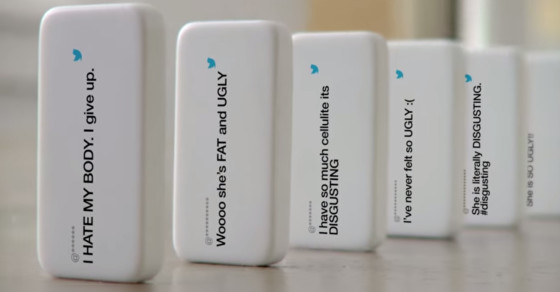 Dove’s #SpeakBeautiful Campaign Is Part Of The Problem
By Joshua A. Krisch

Dove’s #SpeakBeautiful Campaign Is Part Of The Problem

The #SpeakBeautiful initiative, which encourages women to stop calling women ugly on Twitter, is Dove’s successor to its extremely popular Real Beauty Sketches initiative, wherein pretty women describe themselves as ugly until a male sketch artist shows them the truth. Now Dove is at is again, claiming to empower women while pushing its brand.

@hayhayy420 That's just one small part of you. There's much more that makes you special. #SpeakBeautiful & celebrate that!

But it’s more than just a marketing strategy. Misogyny and harassment online has reached fever pitch. Women who invoke the wrath of Internet trolls often face death threats, rape threats and a torrent of abusive language, much of the time from men. We analyzed some of that hate speech on Twitter, and found astonishingly high rates of abusive language.

And yet, Dove’s issue? They want women to stop using the word “ugly” when talking about each other.

Bad words aren’t the real problem—context matters. For starters, Dove never said how often “ugly” was tweeted in a positive or neutral way on Oscar night. We performed our own search of the word “ugly” and found at least 2,500 innocuous phrases, including “an ugly word” (460), “the ugly truth” (151) and “I’m not ugly” (88). Then we performed the same kind of search for “rape.”

That’s 42 rape threats in one evening on Twitter, and there are doubtless many more threats of violence that didn’t fall within our search parameters.

Self-esteem is important, and it’s worth investing in a society that sees itself as beautiful. Dove’s campaign, however, naively encourages us to treat the symptoms while ignoring the real problem. Women feel insecure on the Internet, and men calling them “cunts” and threatening rape is probably a significant part of the reason why.