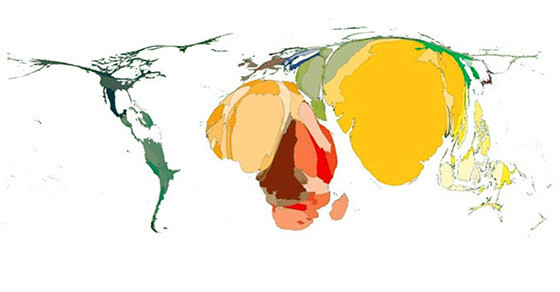 These Maps Show The Link Between Child Mortality And Unvaccinated Kids

Americans have ready access to vaccines, but some people don’t believe in them, as the current raging debate makes clear. In many other parts of the world, though, there is no debate—because the vaccines aren’t available.

And the link between child mortality and a lack of immunizations is strong. See the two maps below, from Save the Children, a nonprofit that raises money for child-focused causes. The first illustrates mortality rates for children under the age of 5—the bigger the country in the map, the higher the mortality rates. The second illustrates the number of unvaccinated children in each country—again, the higher the number, the larger the size of the country.

About 70 percent of unvaccinated kids in the world live in 10 countries, with a staggering 52 percent concentrated in three: India (yellow), Nigeria (peach) and the Democratic Republic of Congo (maroon). You can see that these three countries also have very high rates of child mortality. Conversely, you can see that the U.S. is minuscule in both maps because we have such high rates of vaccination for children and incredibly low child mortality rates.

H/T: Save The Children.