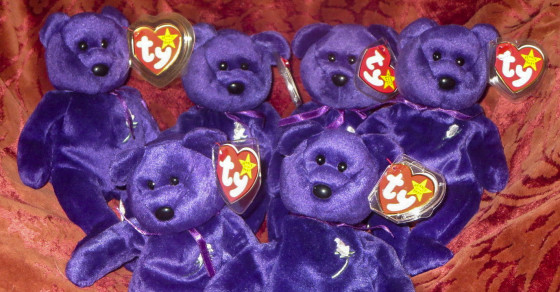 That Princess Di Beanie Baby Listed On EBay For $37K? It’s Worth $75
By Sarah Kaufman

That Princess Di Beanie Baby Listed On EBay For $37K? It’s Worth $75

A Daily Mail article that sparked a viral frenzy this week about a couple from a small town in the U.K. striking it rich with a Princess Di Beanie Baby was missing a key fact: the furry collectible might be listed on eBay for 25,000 pounds (about U.S. $37,268), but it’s actually most likely worth less than $100.

Leon and Sondra Schlossberg, Beanie Baby experts and the moderators of Tycollector.com, say the specific first-generation Indonesian Princess Di bear the couple claims to have found in their garage has sold on eBay mostly for less than $75. Dozens of first-generation Princess Di bears are listed on eBay for hundreds of thousands of dollars, but that doesn’t mean anyone is going to buy them, the Schlossbergs noted in an email to Vocativ.

More All The Ways Characters Die On Game Of Thrones
​

The article is one of a few every year that fuel Beanie Baby mania, especially among people who are experiencing financial hardship and want a glimmer of hope, the Schlossbergs wrote. eBay sellers use the buzz to manipulate the asking prices of listings and fool gullible consumers.

The Beanie Baby appraisals you’ll find on the Schlossbergs’ site, which are based on actual eBay transactions and updated every 30 to 45 days, are a far cry from the six-digit “Buy It Now” figures on eBay. The Peace Bear, which is listed on eBay for $69,000, is going for $100 at most among collectors. A Hoot the owl with only one wing is listed for $450,000, but the most expensive Hoot that’s actually been sold on eBay since the beginning of February cost the buyer $14.99 plus $6 in shipping.

What Are Beanie Babies And Boos Really Worth? (TY Collector)