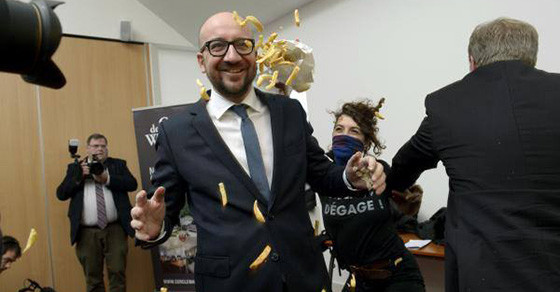 Feminist activists in Belgium threw french fries and mayonnaise on the Belgian Prime Minister Monday in protest of what they believe is his chauvinism and promotion of the wrong economic values. The best thing by far is the reaction of Charles Michel, Belgium’s youngest Prime Minister at the ripe age of 39, who smiled as bursts of artery-clogging food exploded onto his impeccably black suit.

The feminist group called LilithS — formerly the Belgian branch of FEMEN — interrupted Michel in a press conference where he was presenting an economic program to prominent Walloon business leaders. Walloons are Belgians who speak French and have allegiance to French culture. The LilithS activists wore shirts that said, “Michel, get out!” and “Want social with your fries?” “Social” was a play on the word “sauce.” They screamed, “Out with austerity! Michel, get out!” as they pasted him with the gelatinous mess.

Michel reportedly changed his clothes without hard feelings, and did not file a complaint against the women. LilithS does not give interviews, but its official statement via email said it is adamantly against Michel’s budgetary cuts, immigration policies, “criminalization of poverty” and what they call his “surveillance society.”

“Belgium would be better off with no government at all,” the statement says. “Michel, get out!”

The pictures and video show the greasy aftermath are priceless.