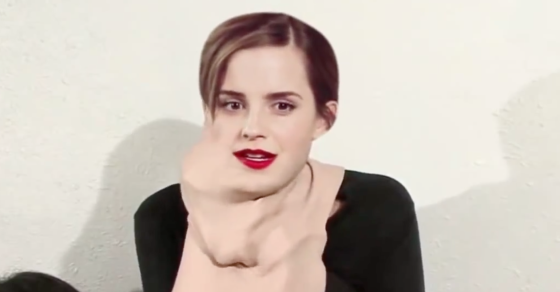 Meet the Man Behind the GIF That Broke the Internet 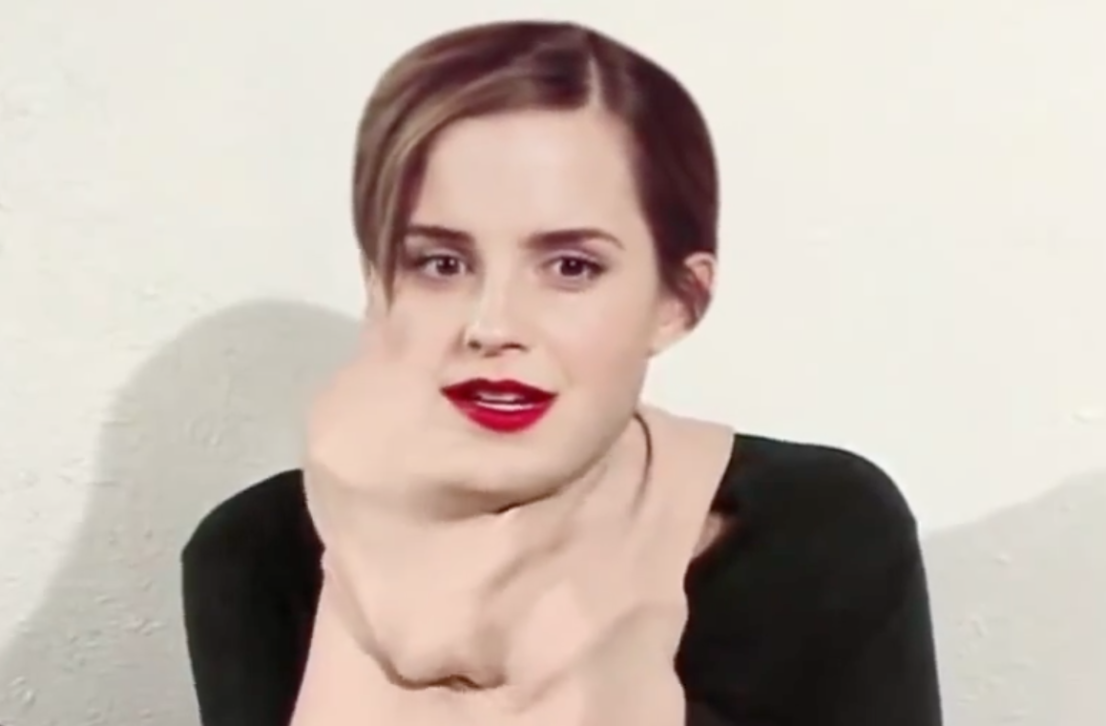 A GIF of Emma Watson has been doing the rounds, and it’s a pretty good one—even by the fantastical standards of the Internet. The Bling Ring star is seen talking before casually discarding her chest and face to reveal a smiling Sophia Vergara underneath. It really is a thing of troubling beauty.

It’s since been revealed that the GIF comes from a video uploaded to the YouTube channel of curveballbe, who we can thank for such flawless digital wizardry. It appears that curveballbe spends his spare time making “breast expansion” videos, which are exactly what they sound like: clips of celebrities with enlarged breasts.

But the actual source material behind the Emma Watson clip is far more interesting. It’s a video of female masker Kerry Johnson, who sells silicone masks of women.

Maskers are an intriguing subculture of men who like to dress up in female masks—and sometimes bodysuits—to look more like biological women. They often take part in photo and video shoots and upload the results so other maskers can comment on their looks.

Johnson, 52, has been masking for 37 years and is regarded as the mother figure of maskers in the U.S., which were until recently a completely hidden group. We reached out to him to learn more about the practice and how this straight family man from Seattle got into female mask-making for a living.

Kerry in one of his masks.
(Kerry Johnson)

What did you think when you first saw the GIF of Emma Watson?
Impressive work, no doubt, but I immediately recognized the source material used—my video. It is amazing what digital technology can do these days, although—showing my age—I’m kind of old-school in preferring to see a real physical mask used in an unmasking scene rather than it being all digital.

Is it flattering that someone would use your work to create something like this?
Yes, but I would have been happier if curveballbe had bothered to ask me for permission first. If he asks me next time, maybe I can even create a better base video specifically for him to use. And while this is indeed very nice work, and I’m glad it’s getting attention, I do despair at the lack of respect for intellectual property on the Internet. Moral: Always give credit.

What has the reaction been like?
The Huffington Post seems impressed, although they couldn’t resist referring to my original video as “creepy.” Lazy journalism if you ask me. Too much of the Internet seems to be run by people who want to run down anyone who doesn’t fit their very specific definition of normal. I’ve also had to deal with a lot of negative comments being posted on my original YouTube video. Some folks just can’t resist trolling, I guess. But on the plus side, I have added a lot more subscribers to my YouTube channel in the past few days. I suppose the real question is: What do Emma Watson and Sofia Vergara think? Are they amused? Horrified?

Tell me about masking and how you got into it.
I have been obsessed by female masks since I was a youngster. My favorite things to see in movies or TV shows were a woman taking off a rubber mask disguise; old 1960s Mission: Impossible was the gold standard for this. Eventually I started making my own female masks in the mid-1990s, when nothing like them were available, and eventually it turned into a business.

But why do you do it?
I just like the idea of a woman in disguise. I can’t explain why. But until the Internet was invented, I thought I was the only person on the planet with this fetish. How wrong I was. I’ve since found fetish magazines dating back to the 1940s with examples of this. Now I sell all those guys with similar interests my masks.

Tell me more about the masks you make.
I started out making latex masks that ranged from semi-realistic, with open eyeholes, to ones that clearly are more doll-like, with painted eyes. Now I have a line of realistic silicone masks as well. I’ve sold more than 2,000 masks over the past 18 years to people all across the world. Most of my customers are crossdressers who either have a mask fetish like me, or else need to wear a mask because they can’t pass as a woman.

More attention is being paid to maskers lately. Do you like the spotlight?
I’m still coming to grips with this raised awareness. For a great majority of people, seeing someone masked is very disturbing and off-putting. I can’t overcome deep-set phobias, but I suppose familiarity eventually breeds acceptance, and once folks come to see we are just doing a bit of harmless dressing up, then that’s a good thing. Obviously I’d like this sort of attention to equate to more sales for me, but I’ve yet to see any such correlation. I certainly would not describe masking as something I’ve tried to keep secret or hidden from the world at large. I’ve been maintaining a website about it since 1995. But I appreciate there is a circus freak-like atmosphere when it comes to the mainstream media attention. While I’m the first to admit that what I do is different and very unusual to most people, it does hurt a bit to get called names. I despair for the mob-like mentality of the Internet, and its overall immaturity.

Do you think that masking will ever be accepted as a slightly more mainstream subculture? Is that something you’d want?
Who wants to be equated with serial killers? Thank you very much, Silence of the Lambs. I’d like that sort of talk to stop but I’m not holding my breath. The furries don’t have this problem. What’s the real difference between them and us? Or cosplay in general? It amuses me now to be part of an outlaw fringe group, sometimes I feel more comfortable that way. But hopefully the younger generation of maskers that are coming up will have a better time of it. For now, with social media, like-minded people from all across the world are able to get together and share their particular hobby. And if other people don’t get it, well, that’s life. Too many people spend their lives obsessing about being normal and hewing to the established line, but if anything I’ve always gone in the opposite direction. Who wants to be like everybody else? Not me.