Meet Abu Sharmouta (aka Dad of a Whore)
By Alessandria Masi

Meet Abu Sharmouta (aka Dad of a Whore) 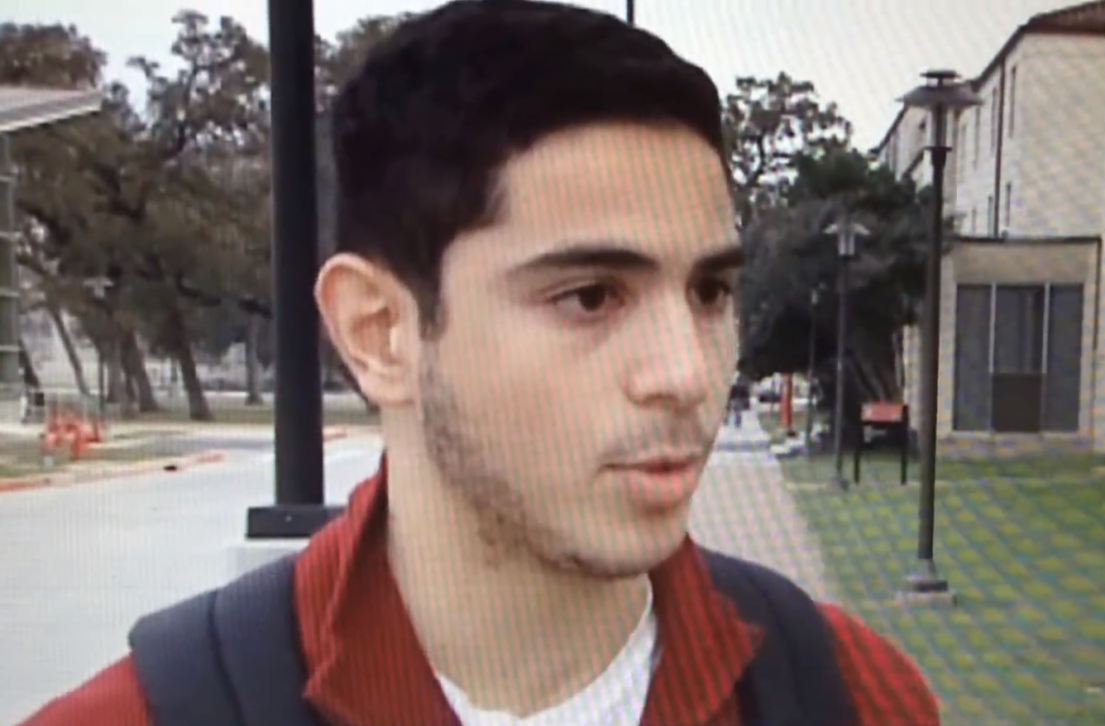 Three men robbed six students at gunpoint at a University of Houston dorm last week. But what turned out to be a much bigger story unfolded as news crews arrived on the scene.

Sayyed Jamal Hamideh, a junior studying broadcast journalism, got his 20 seconds of fame by hilariously trolling two reporters who had arrived at the school to get to the bottom of the robbery, Crystal Kobza, from KTRK ABC13, and a journalist from Univision 45.

Instead of giving his real name for the interview, Hamideh used the name Abu Sharmouta (meaning “dad of a whore” in Arabic). Sharmouta is one of the most common swear words and Abu (meaning “father”) is usually used with the father’s first-born son’s name as an honorific. Hayiddeh does not have any children yet, nor has he named his first-born son Sharmouta, a fact that the reporters forgot to vet.

Hamideh’s performance has turned him into an Arab-American sensation, and he now has people from all over the Middle East and North Africa tweeting at him, saying he has managed to put a smile on their faces. (No one was hurt in the robbery, by the way.) We talked with Hamideh about how the whole thing went down.

Tell us about your background.

I’m a junior at the University of Houston. I’m Palestinian. I’ve never actually lived in Palestine. I lived in Jordan for five years. I’ve been here since I was six years old, but we visit the Middle East pretty frequently.

How were you sure she wasn’t going to know what it meant?

I wasn’t sure. It’s just a chance you take, I guess. And it ended up working.

Can you walk me through what happened that day?

I had heard there were news trucks because a robbery happened or something like that. I had my friends take me over there and on the way over we were thinking of funny names to do because I was going to try and see if I could dupe them with a fake interview and one of my friends said to do that one. So I said, “All right, we’ll go with that one.” So I was interviewed by a guy from the Spanish channel first and right after I got interviewed by him, she [Kobza] jumped in to interview me.

It’s pretty awesome. Not just the attention but the whole reason I did it is I have this group of friends and I’m kind of a big jokester and I was just doing it to see if I could do this and get my mind off finals and get everyone else’s mind off finals. It was kind of an inner-circle thing. I didn’t expect it to blow up like this. It’s pretty amazing seeing Lebanon, Syria and then Palestine itself. People are tweeting at me saying how happy it made them and how happy it made other people.

Why do you think it made everyone so happy?

It’s a bit childish. Well, it’s not childish because everyone is laughing at it but it’s kind of a childish joke. Arabs will laugh at the smallest things so I think getting an Arabic cuss word on TV and getting not only the woman, Crystal, to say it but the other people to say it was just a funny thing for them.

What has been the best reaction you’ve gotten so far?

Mostly, it’s people tweeting from the Gaza strip, from Egypt, from places like that telling me how big of a smile it put on their parents’ faces or their whole family’s faces.

.@ThatPancakeKid Is now a celebrity in the Arab community. Even my parents heard about him lmao

Ladies & Gents, this is Abu sharmouta---> @ThatPancakeKid Arab Americans, you wanted a community leader? here it is.

Do you think it took away at all from the fact that six people were robbed at gunpoint?

To tell you the truth, it probably did. It did. But this is the same story every single week. A week ago there was an armored car that came and did a robbery, so I don’t know. It definitely took away from that though.

Do you think this was a racist thing?

I don’t really see it as racist, I think she’s just a little uninformed. She was a bit innocent. I think she might not have taken the proper steps, maybe she should have ID’d me or something.

What are your friends saying about it?

My friends are going crazy about it, just laughing. I think they’re more excited about it than I am.

Has the news channel gotten in touch with you since it aired?

No. I tweeted at Crystal jokingly, but she hasn’t answered me back.

What about a backlash from women—has there been any of that?

I want to add that if it came off as offensive to any women, I apologize. I’m not a misogynist or anything like that. It was just a joke and that was just by chance the word I chose. We’ve gotten a little [backlash] and I can understand where they’re coming from.

Why do you think there would be backlash?

It’s weird because I have a corner of feminists that are like, “Man, that’s hilarious. I’m a hardcore feminist, and this is just great, and I can say that it’s funny.” Then I have the other corner that’s like, “Why did you have to chose that word, this word degrades women, and stuff like that.”

How did you keep a straight face?