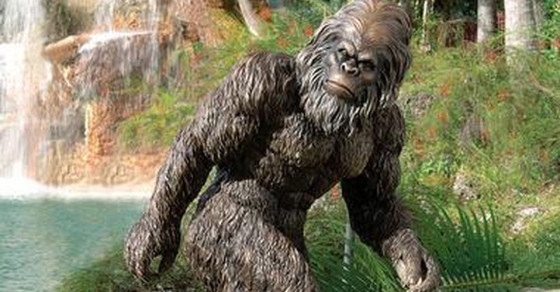 At Least I Have This Yeti To Remember SkyMall

I’m not even sure when I first spotted the Yeti, deep in the pages of a (probably sticky) SkyMall catalog, mostly because a look-see through the randomness of its myriad offerings—inspirational posters! LOTR elf necklaces! Neck massagers!—is a must for me on practically every flight I’ve ever taken.

But one Christmas, around four years ago, my boyfriend and I became the proud owners of Charles (we named him)—a 12-pound, nearly 30-inch-tall BigFoot Garden Yeti. It was a gift to the BF from my brother-in-law (at my suggestion), and he’s held court in a corner of our living room ever since.

The fact that he’s called Yeti has caused many discussions on what is or is not a Yeti. (BF says without a doubt Charles is actually a Sasquatch, or Bigfoot as his names suggests. Yetis are snow creatures, have white fur, and would never be caught in a garden.)

Still, Charles is a Yeti/Bigfoot/Sasquatch for all seasons, and a pretty great conversation piece when we have people over: Why, exactly, is that in your house?

So even though SkyMall is departing to the tchotchke graveyard in the ether, we’ll always have our statue to remember them.