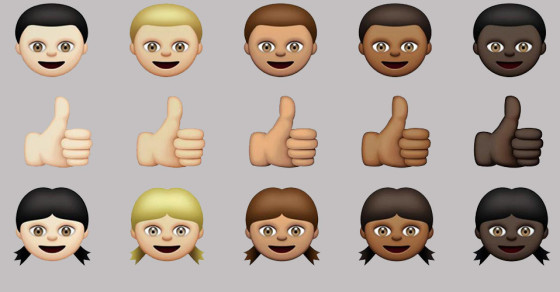 Meet The White Guy Behind The Emoji Skin Scale

Even the scale that determines Apple’s racially diverse new emojis has a history of white preference.

It was confirmed on Monday that with the next update to your iPhone, you’ll be able to get 300 new emoji options, adding some much-needed racial diversity to the emojiverse. If you hold down on several people emojis, the program will present you with five different skin tones, 9to5mac reports. The emoji skin tone options are based on the Fitzpatrick scale, a scientific dermatology scale used to calibrate skin color, based on how fast different skin types burn in UV light.

Harvard medical pioneer Thomas B. Fitzpatrick created the scale after a 1972 study in Australia that focused on how skin burns under the sun. Despite the existence of a large Aboriginal population in Australia, Fitzpatrick focused on the skin of white Australians only. Categories for darker skin types were added later.

That’s not to say that the doctor behind the scale was in any way racist. In fact, Fitzpatrick, his own skin as white as his lab coat, was a genuine groundbreaker. His obsession with skin and sunlight led to numerous discoveries about how skin cancer forms, and he was involved in early research into what compounds should go into sunscreen.

Fitzpatrick died at age 83 in 2003, by which time he was known as the father of academic dermatology. He taught and researched for 40 years at Harvard, where he was the university’s youngest professor and was credited with reinventing the dermatology department. He quite literally wrote the book on dermatology—it’s now in its eighth edition. It’s doubtful that he’d have ever conceived of this use for his scale—but, hey, you can trust him on the sunscreen.

The most updated Fitzpatrick scale has six skin categories, so it seems one emoji was used to represent Type I and Type II:

You can find out what type you are by taking this short quiz.