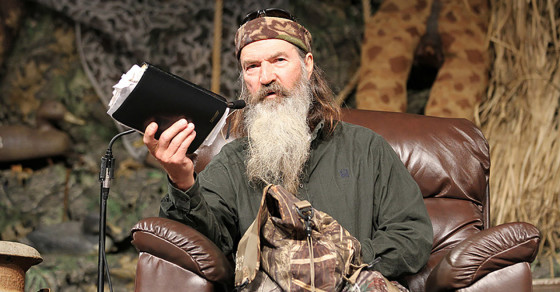 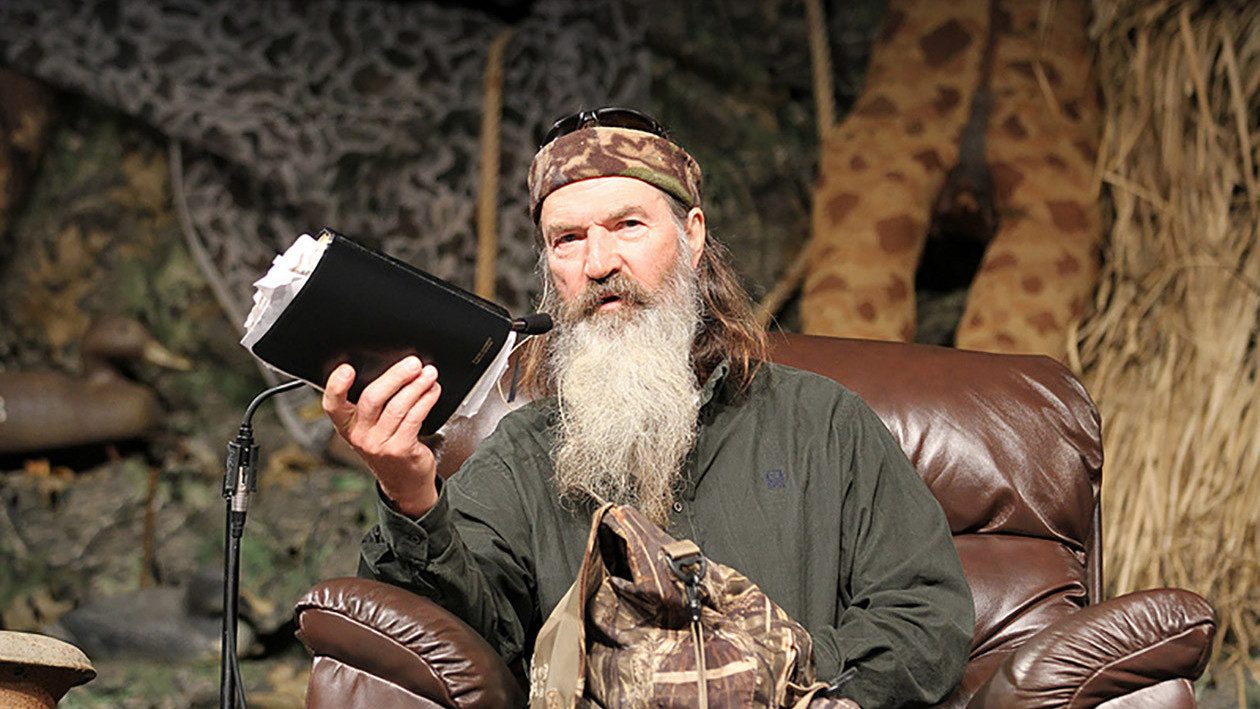 The Robertson clan continues to expand their $400 million empire of duck calls, sweet tea glasses, and other Duck Dynasty-themed goods, so it’s only natural that they’ve added the word of God to the mix. Earlier this week, Duck Commander Phil Robertson and his eldest son, Alan, announced the release of their latest book, The Duck Commander Faith and Family Bible, which will hit retail stores in October just in time for Christmas. The Robertson’s version will feature a King James Translation in addition to 30 testimonials and 125 inspirational quotes from Phil, the family patriarch, and Alan, a pastor. According to publisher Thomas Nelson, the Duck Dynasty bible will focus on the family’s five main values—faith, family, fellowship, forgiveness and freedom—and will include first-hand accounts of how the good word has transformed the family. No word yet, on whether or not that will include Phil’s much maligned interpretation of Corinthians, which equates homosexuality to bestiality and greed.

This isn’t the first time the Robertson family has dabbled in Christian publishing. There is also Faith Commander: Living Five Values from the Parables of Jesus, The Duck Commander Devotional (which comes in pink or brown), and The Duck Commander Family: How Faith, Family and Duck Built A Dynasty, all written by various Robertson kin. This also isn’t the first time someone decided to cash in on scripture with some good old-fashioned repackaging. In fact, compared to some of the other niche-motif bibles out there, theirs isn’t even that ridiculous.

Behold, the weirdest makeovers in Christendom.

An absolute essential for any Nascar fan, the Stock Car Racing Edition of the Holy Bible features “exciting and inspiring full-color inserts with photos of and insights from stock car racing’s finest personalities” intertwined with holy scripture. Unfortunately, the book does not come with a six-pack of Keystone Light, as one reviewer lamented, but it would make great gift for anyone looking to rev up their devotion. Customers who viewed this item also viewed—and we are not making this up—Mircowave Cooking for One, Knitting With Dog Hair, and Birth Control is Sinful in the Christian Marriages and also Robbing God of Priesthood Children!!

This Japanese manga adaptation of the Bible reads like a graphic novel. The “audacious little book” was illustrated by the British illustrator Siku and features “jazzy and irreverent riffs” on biblical stories, according to Publisher’s Weekly. It also purports to be Britishism-free in its translation of verse, opting instead for a slangier, cooler tone (think Cain going to Abel to say “Whassup, bro?”).

If you enjoy the AWW subreddit or cuteoverload.com, then the Playful Puppies Bible will have you speaking in tongues. This New International Version features twelve pages of glossy, colorful puppy photos with inspirational thoughts on them to help you get through a hard day. Who knew scripture could be so freaking adorable?

The Super Heros Bible features your favorite bible dudes—Moses, Jesus, Job, Abel, and more—jacked up on the spiritual ‘roids of The Lord, which is apparently what happens to the “the many ordinary people zapped by God into superhero status,” according to the publishers. Did we mention it comes with 3D glasses?

The Hello Kitty bible is the ideal present for any young lady you fear may be straying from the lord’s path but also loves cute Japanese stuff. It’s even plushy, providing the perfect pillow to cry on during moments of adolescent woe.