Will pop stars stand their ground on #BoycottFlorida?
By Versha Sharma

Will pop stars stand their ground on #BoycottFlorida?

Pop stars fueled with rage have called for a boycott of Florida after Trayvon Martin’s killer, George Zimmerman, was found not guilty of second-degree murder. But when they’re actually faced with canceling concerts in the Sunshine State, will they stand their ground?

Stevie Wonder was the first high-profile voice to lead the charge. The singer aired his disgust at a concert in Canada earlier this month. “I decided today that until the Stand Your Ground law is abolished in Florida, I will never perform there again,” he said.

Since then, sources close to Wonder have reportedly said the power of the boycott is growing—with Madonna, Jay-Z, Justin Timberlake, Kanye West, Usher, Rihanna, The Rolling Stones and R. Kelly joining the chorus. Except most of those artists’ representatives have now said that’s not true. Timberlake spent Tuesday tweeting at fans angry over the alleged boycott that they needed to learn the facts and stop trusting blogs.

The Stand Your Ground law states that the use of lethal force is justified if a person “reasonably believes” his or her life is being threatened (even in cases where the “opponent,” like 17-year-old Trayvon, is unarmed). Though the law was not used as Zimmerman’s defense, it played a starring role from the moment Trayvon was shot dead. Police in Sanford didn’t arrest Zimmerman for weeks after the incident because of the law. Zimmerman also lied about having no knowledge of the law at the time of the shooting, a lie that was uncovered during the trial. An explanation of the law appeared in instructions given to jurors—one even cited it in the reading of the verdict.

There’s another flaw in the plan to boycott Florida—at least 23 other states have some version of a Stand Your Ground or Shoot First law on the books. Wonder also said at the Canada concert, “Wherever I find that law exists, I will not perform in that state or in that part of the world.” But his fellow boycotters may not feel quite as strongly.

Timberlake and Jay-Z, who are currently on tour together, have an Aug. 16 date in a Miami suburb that is still scheduled to go on. Jay-Z is raising awareness, attending a rally in New York City with his wife, Beyoncé, and Trayvon’s mom, Sybrina Fulton, and telling fans at his Yankee Stadium concert last weekend, “Let’s light up the sky for Trayvon tonight!” before performing “Forever Young.”

Even through it’s still unclear whether the pop stars will follow through, all the boycott talk is definitely drumming up interest. Vocativ scoured social media to see if these artists are having a real impact on potential tourists. 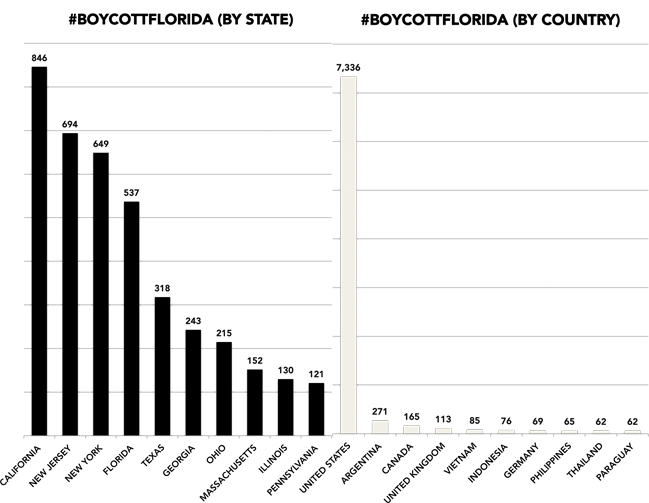 We crunched numbers to see where Twitter users are talking about #BoycottFlorida the most. Use of the hashtag spiked on July 14 and 15, the two days following the verdict. The charts above take all tweets from the last seven days, where there have been about 9,000 tweets total on the topic.

Californians seems to be into the idea, and the next highest numbers come from New Jersey and New York, where many of the rallies for Trayvon have taken place. The United States cares more about the issue than the rest of the world, but the country second in line for #BoycottFlorida is still surprising: Argentina (with significantly fewer tweets, however). Some people on the #BoycottFlorida and #NotFlorida hashtags are even saying they’ll stop drinking Florida’s trademark drink, orange juice.

The official Visit Florida Facebook page has more than half a million likes and proudly boasts of the state’s record on race relations. If you go to the site today, don’t expect to find any comments about boycotting Florida—they’re being scrubbed. In multiple posts from the last week, comments from anti-boycott Facebook users appear, but those calling for a boycott or supporting it are nowhere to be found. 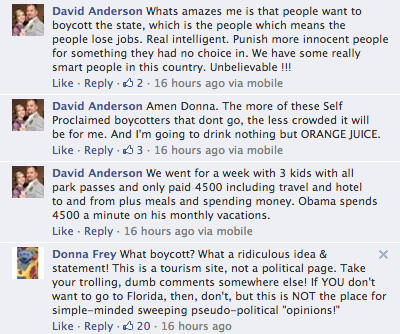 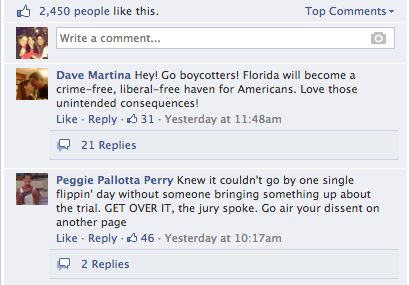 Those skeptical of a boycott having an actual impact on Florida should look a few years back to Arizona and 2010, when the controversial SB 1070 passed, requiring all immigrants to carry papers or face a misdemeanor. Boycotts of Arizona cost the state about $141 million in revenue in 2010, according to a study from economic firm Elliott D. Pollack & Co.

The stakes are even higher for Florida. Last year, the state raked in $71.8 billion in tourism. Florida’s tourism bureau did not respond to our request for comment.