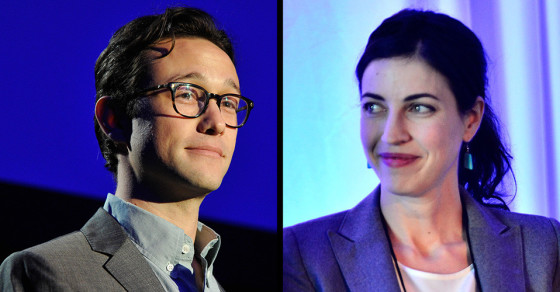 Since news broke last spring that they were dating, virtually every media outlet to cover McCauley’s relationship with Gordon-Levitt—from People to Perez Hilton—has identified her as the CEO and co-founder of Fellow Robots, a Silicon Valley robotics company. News of their nuptials was accompanied by a rash of variations on the headline “Robotics CEO Marries Hot Actor,” many of them feminist responses to the “Actor Marries Smart Girl” headlines, which mansplained how a hot guy might actually want to marry a smart woman.

But here’s the problem with both batches of display text—basic accuracy. A visit to the Fellow Robots website plainly reveals that the CEO and CTO is Marco Mascorro. McCauley’s name is nowhere to be found among the list of seven employees and three co-founders.

She’s also conspicuously missing from Fellow Robots’ AngelList page, which names only Mascorro and Fahn as co-founders. We reached out to Fellow Robots, who told us via email that McCauley has left the company. (At press time, the company had not confirmed her former title or exit date, but were “checking” whether or not she had been a founder.)

Nevertheless, McCauley identifies herself on LinkedIn as currently employed as a co-founder of Fellow Robots. McCauley’s profile from the University of Southern California’s Marshall School of Business, where she earned her MBA last year, describes her as the co-founder and creative director of Fellow Robots.

Her personal Twitter and AngelList page more ambiguously indicate that she past-tense “co-founded” the company.

In summary: This is weird. Our intent isn’t to diminish McCauley’s formidable accomplishments (she previously served on the faculty of Singularity University, instructing students in robotics and artificial intelligence). We simply mean to ask: What’s the deal? It’s downright bizarre to think that journalist after journalist would have thrown a celebratory “CEO” into their headlines without spending two minutes on Google to check the facts.