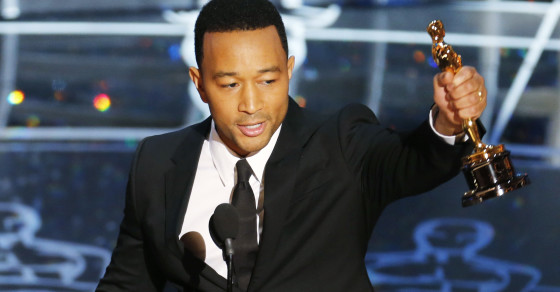 Oscar Viewers Care Way More About #RedCarpet Than Anything Important

In the lead-up to the Oscars, we saw Twitter bubbling over with frustration at Hollywood’s lack of diversity. #OscarsSoWhite displaced all other Oscar-related hashtags, with more than 8,500 posts between Feb. 21 and the rolling out of the red carpet. Many had called this year the whitest Oscars since 1998; every nominee in the lead and supporting categories was white. But #OscarsSoWhite subsided during the actual ceremony. In real time, people were far and away most fascinated with the fashions on the red carpet.

People Cared Only This Much About Oscar Speeches

Although heartfelt speeches about suicide prevention, human rights and Lou Gehrig’s disease did inspire spikes of conversation on Twitter, they did little to distract from virtual fashion policing. People tweeted #RedCarpet around four times as much as the runner-up hashtag, #StayWeird. Activism clearly doesn’t have the power to unite us like the entrance to a star-studded awards show.

Graham Moore, who won best adapted screenplay for his work on The Imitation Game, coined the catchy #StayWeird hashtag. In his heartfelt acceptance speech, Moore said that when he was 16, he tried to kill himself because he felt like he didn’t belong. He offered advice to children who now feel the same way: “Stay weird, stay different, and then, when it’s your turn, and you are standing on this stage, please pass the same message to the next person who comes along.”

#EqualPay refers to Patricia Arquette’s political speech on equal pay for women while accepting the best supporting actress Oscar. Her speech set off the Meryl Streep and J. Lo GIF of the night. Arquette also ignited controversy, however, when she added a comment to her speech backstage that many thought excluded people of color and gay people from the feminist conversation.

When rapper Common and John Legend accepted the Oscar for best song, both gave a passionate speech that compared the number of 19th-century slaves to modern-day African-Americans in the criminal justice system. Inspired fans are now throwing their support behind the social media campaign for Students Unite in Alabama with the hashtag #SelmaIsNow.

"There are more black men under correctional control today than were under slavery in 1850” – John Legend #SelmaIsNow pic.twitter.com/NySYmaZXyo

Since Legend’s speech, the hashtag jumped by over 5,000 posts on Twitter and more than 1,000 posts on Instagram. The last flurry of #OscarsSoWhite heat may have been fanned by Sean Penn’s “Who gave this guy a green card?”

But the night still belonged to the 140-character sartorialists and their #RedCarpet hashtag.