Tattoos: The Best Business Cards in Berlin
By Joel Stonington 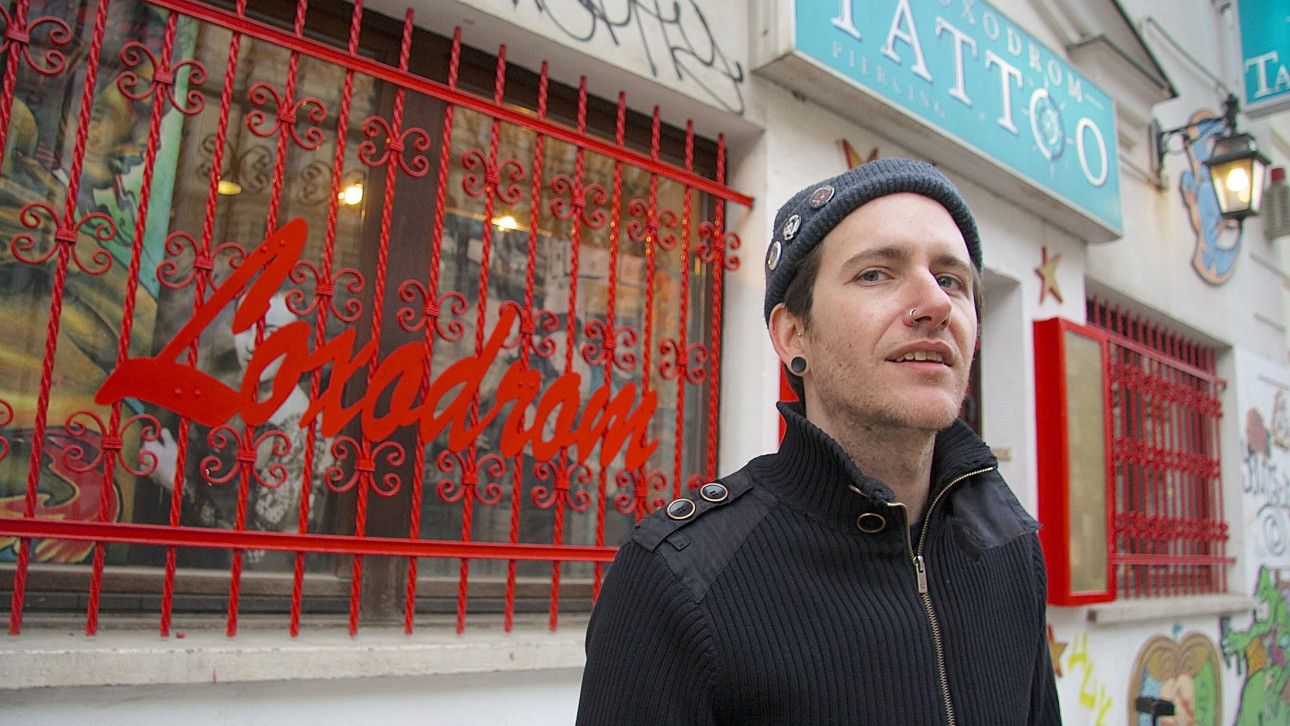 Humble American tattoo artist Brian Kelly is walking in a Berlin subway station when a woman looks at him with the excitement of seeing a celebrity and asks, “Brian Kelly?! Brian Kelly Army?” He laughs and turns away. “I don’t know that girl.”

She had recognized Kelly by his signature tattoo: his own face. For 25 bucks he’ll tattoo it on anyone. Or, as he puts it, $25 buys you lifetime membership to the Brian Kelly Army. It’s pretty cheap, considering even a simple tattoo can cost $80 to $100. To date, he has tattooed his face onto 74 members.

“Sometimes, if it’s a friend, I think I understand,” he says. “If it’s not a friend, then I wonder: Why are they getting this? Sometimes I wonder who they think I am.”

Brian Kelly shows off the very first Brian Kelly Army tattoo, on his calf. He says the "nothing" tattoo below it is unrelated.

Kelly certainly looks like a rock star. He chain-smokes Marlboros, wears all black and lives in a tight leather jacket. His knuckles and sleeves are tattooed, and he sports plugs in both ear lobes. The signature tattoo is a stylized version of a photo of himself, à la Shepard Fairey’s famously co-opted image of Barack Obama.

Kelly came up with the idea after finishing art school in Minneapolis. At the time, he was really into Fairey and Andy Warhol. He figured if you were going to do a graphic art version of a face, you might as well use your own. So he tattooed the first one on his calf.

“It’s all I talked about,” he says. “I probably pushed it pretty hard for two or three years.”

A clock with the Brian Kelly Army logo in black and white hangs on the wall at Loxodrom Tattoo and Piercing.

The tattoo comes in either black outline or with color added. The black version takes about 45 minutes and color takes an hour and a half. Kelly says the modest cost definitely doesn’t make him any money, but the fee is more about principle than anything else.

Kelly says some people get the tattoo because they know him or because he’s done most or all of their tattoos. That was the case for Ina Schneider, 29, who says she got it because he had already done tattoos on her arm, back, foot and fingers. “I just liked the idea,” she says. “People always come over and say, ‘Who is this?’ And when I tell the story, they’re really shocked. I think it’s fun. They’re like, ‘Are you serious?’ And I’m like, ‘Yeah, it’s an army.'”

When he started doing the face, Kelly also offered a cheap tattoo of a Warhol, but he says everyone preferred to get the Brian Kelly instead. Plus, he was talking up the face all the time. And there was one more thing that made a difference: “I was working in kind of a ghetto studio, and no one knew who the fuck Andy Warhol was.”

Kelly walks out of Loxodrom Tattoo and Piercing, where he works in Berlin, for a smoke break.

Kelly grew up south of Minneapolis and says he fell in love with tattooing early. He gave himself his first tattoo at age 12 with a needle and some India ink. It was a cross on his arm. His first professional tattoo came six years later.

“I got out of jail and went straight to the tattoo studio,” he says. He had just done 40 days for possession of LSD. The tattoo was a four-leaf clover, and he hasn’t been in jail since.

“I’m of the opinion that tattooing chooses you or it doesn’t,” he says.

Of course, tattooing isn’t like professions that have a straight track. It’s informal. At first he couldn’t find a way into it. Then a friend from college eventually opened a studio, and Kelly started doing tattoos almost immediately. “I had no idea what the hell I was doing,” he says.

“There’s this idea of a proper apprenticeship,” he says. “Like, you’d hang out and be the shop bitch for a while and work your way up. I’ve never met anyone who actually did that. People call and are like, ‘Do you teach people to tattoo?’ And we’re like, ‘No.'”

He says the profession allowed him to travel, and since it’s a cash business, he can make money anywhere. So he spent a few years in Ireland and moved to Berlin five years ago.

Kelly speaks with Darya Gudyrenko, 26, before he starts filling in a tattoo on her leg. This one is not of his face.

On a recent afternoon at Loxodrom Tattoo and Piercing, where he works, Kelly tattoos the leg of Darya Gudyrenko, 26, a Ukrainian who has lived in Berlin since she was a kid. When asked about getting a Brian Kelly Army tattoo, she says, “I thought about it, but I can’t find a place.”

Her ass is suggested.

Kelly gets to work on Darya Gudyrenko's leg.

“My ass? Brian Kelly on my ass?” she asks. “Maybe somewhere else.” She looks up at Brian. “How many have you done?”