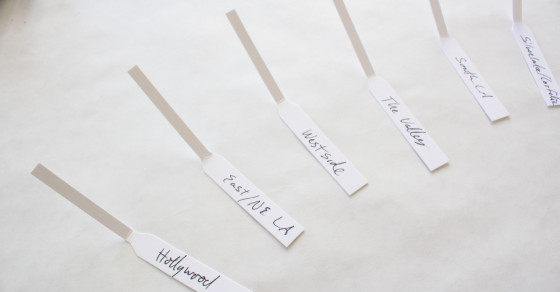 The Smells of Los Angeles as Art
By Emily Levy

The Smells of Los Angeles as Art 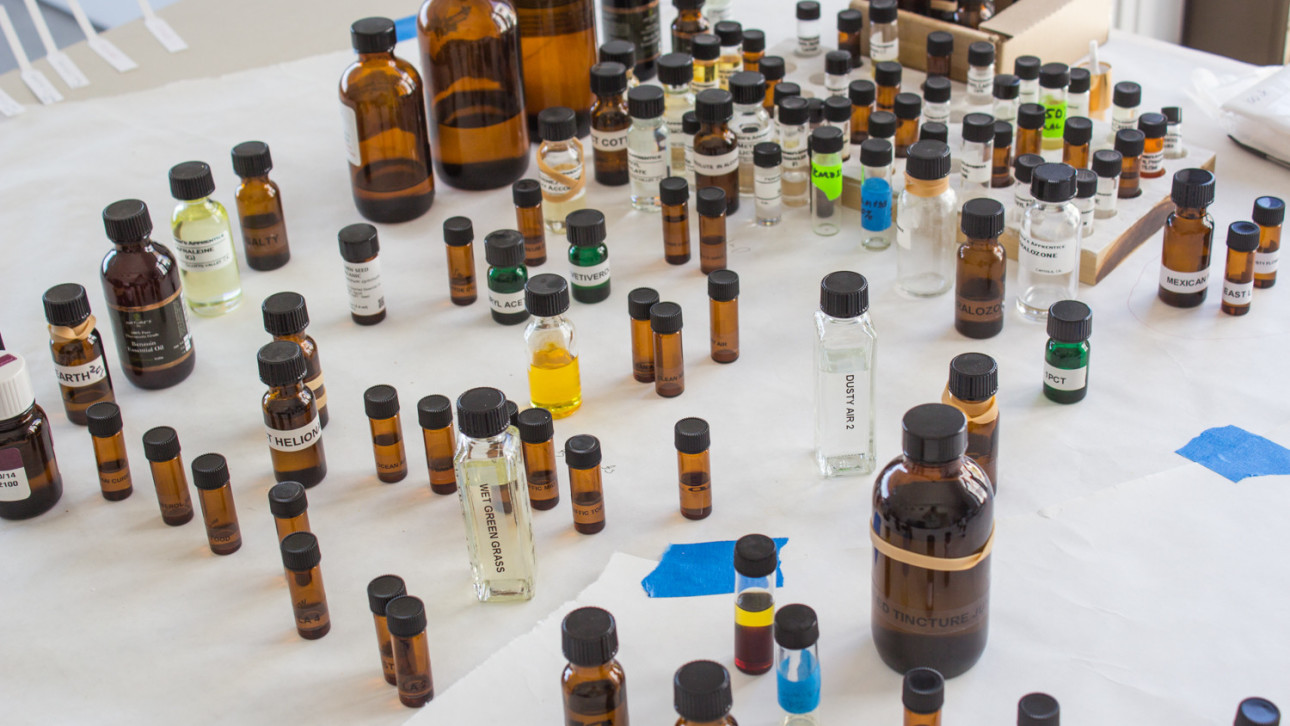 When olfactory artist Brian Goeltzenleuchter set out to map the city of Los Angeles by smell, bottling up neighborhoods in perfume jars, he borrowed the noses of Los Angelinos to do so–via a survey. Asking fellow city dwellers to sniff out their blocks and put words to the scents, he crafted regional fragrances, ones that would evoke familiar urban spaces. And on Saturday at the Santa Monica Museum of Art, Goeltzenleuchter will spray his crowdsourced scents onto the arms of museum visitors, infusing the space with a potent mix of the city’s signature smells. “I love working with smell,” says Goeltzenleuchter. “It puts most people in a state of shock.”

Smell is the most powerful of our five senses, and the artist’s one-day exhibit—known as Sillage, the French word for the scented trail a fragrance leaves behind—is an ode to L.A.’s strongest natural and artificial scents: asphalt, clean sweat, cut grass and, as some suggest, hipster. Which means it’s not only a celebration of smell, but it’s also a tribute to the city itself. “As we talk about all these hip locative technologies, here’s old-fashioned locative technology—knowing where you are based on smell,” he says.

In the world of olfactory art, Goeltzenleuchter’s work is known as a “scent-scape,” or geography of scent—a scent-based experience of a given location. The term was institutionalized at the turn of the century by artist and theorist Gayil Nalls, who constructed the “World Sensorium,” a “social olfactory sculpture” that used population data and country-specific fragrances—ones based on the flora and fauna of a given nation—to construct a scientifically sound global scent.

As a form, the scent-scape has taken on various guises. Belgian olfactory artist Peter De Cupere, for instance, used smell as a means to richen photography in his 2005 exhibit, Scent Borders of Paris, for which he traveled through Paris’ various neighborhoods, experiencing the scents of urban items like chewing gum and cigarette butts for their “olfactory charisma,” then channeling that into visual stills of the city. And during a 2013 trip to New York, De Cupere conducted a series of interviews with New Yorkers about their perceptions of the city’s aromas, putting visuals and profiles to his latest scent-scape. (His montage is available at NYSmellsLike.com.)

“I thought: Maybe it would be nice to give a smell identity to the city,” De Cupere tells Vocativ. “Like a monument. Smell is good for collective memory.”

Regardless of its look, the point of the scent-scape, says Goeltzenleuchter, is to transport the smeller. And while the artist plans to keep his survey open for future projects, allowing for his crowdsourced scents to shift, he’s already crafted 10 fragrances for the Saturday show. He offers a taste: South Los Angeles smells like “metallic heat and hydraulic fluid”; the city’s west side smells of “clean ocean air,” or “someone who left the sprinklers on”; and downtown is redolent of “hot asphalt and traffic exhaust.”

Creating a cadre of fragrances invokes commerce, and the line between Goeltzenleuchter’s art and commercial products is certainly fuzzy. In a 2010 story in Psychology Today, the Sensorium’s Nalls discussed the ever-changing feel of olfactory art: “Over the past decade the relationship between the visual arts and olfaction has moved beyond the boundaries of teasing, humorous and entertaining, to an expansive and distinct contemplation,” she wrote. Since then, artists have taken “contemplation” about smells as destinations in time and pushed it further, combining the beauty industry and art into one giant project.

Which yields the question: Is the scent-scape as a geographical and temporal timeline really art? In a 2012 exhibit at New York’s Museum of Art and Design tilted The Art of Scent, artist and former New York Times perfume critic Chandler Burr presented 12 major moments in fragrance between 1889 and 2012. The show, which studied “fine fragrance,” considered olfactory art through the lens of perfume. Olfactory art, the critic said in an interview with the Daily Beast, “must be artificial.” “It is impossible to create art entirely with nature,” he said, underlining his thin distinction between fine art and commercial product.

While Goeltzenleuchter thinks of his scented art as something very much removed from the world of commerce—smell, he says “does the most with the least amount of visual baggage”—there’s one thing on which both artists can agree. Olfactory art has, in some ways, been “completely and aggressively and successfully colonized by commercial interests,” as Burr put it in his 2012 interview. Burr cites Hollywood stars who appropriate smells for their own celebrity; Goeltzenleuchter instead believes it’s new technologies like oSnap, the app that sends scented text messages across the country.

Either way, it’s clear that smells can serve as a powerful narrative. And Goeltzenleuchter, who describes his Saturday exhibit as a “foil” for things such as “institutional politics,” considers his work a vehicle to better understanding the world he inhabits: “What you’re actually doing is making a portrait of the museum’s demographic through smell,” he says.

He hopes visitors will come for his scents, then explore the museum’s other exhibits, allowing the various smells to conflate and waft through the space. “There might be some discord,” says the artist, “but that’s L.A.”

And for all these artists, it’s continuing to think about how olfactory art can expand and dissipate into new fields that will trigger the most creative momentum in the industry. “I think fine art is the best thing that has happened to the discussion of the sense of smell,” says Nalls. “We need more information on the sense of smell and how important it is. It’s literally everything.”