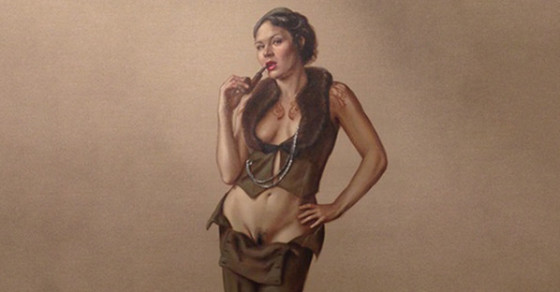 Painting Pulled From Exhibition Because of “Disgusting” Pubic Hair 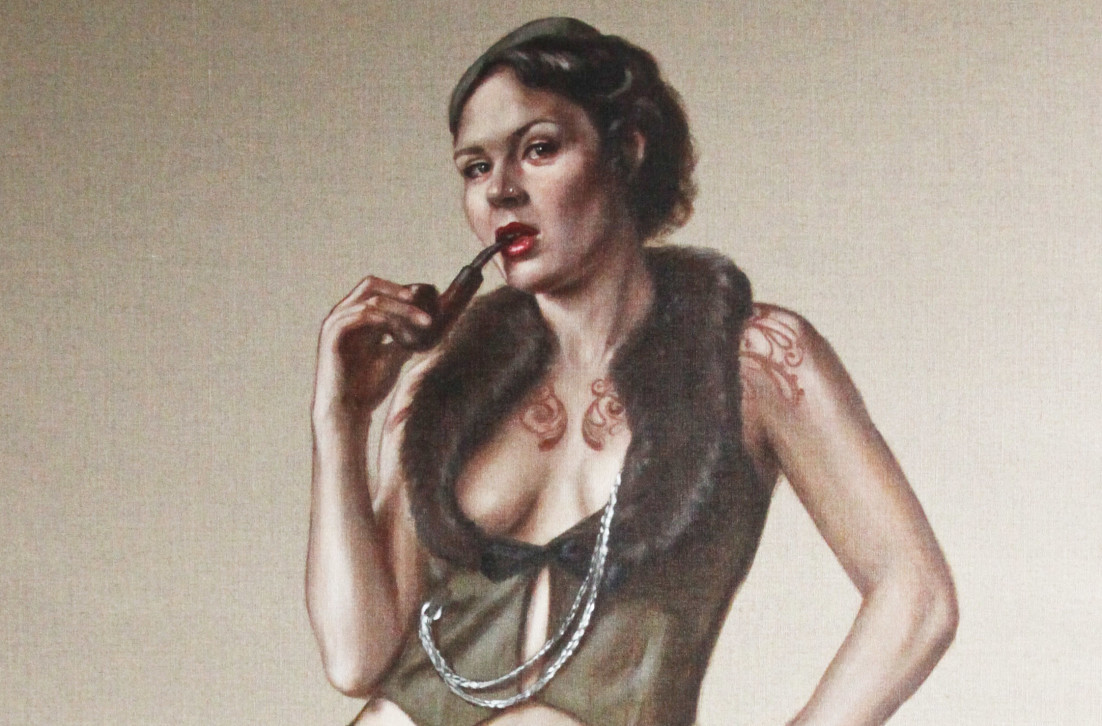 When artist Leena McCall got the phone call she was “pretty pissed off.” On the other end of the line was a representative from the Society of Women Artists who had rung to inform her that her painting had just been pulled from their group show at London’s Mall Galleries for being “too pornographic and disgusting.”

The work in question, Portrait of Ms. Ruby May, Standing, is an oil painting of the artist’s friend. In it, May, dressed in a fur-trimmed vest and pants, unbuttoned to reveal a strip of pubic hair, smokes a pipe while looking directly at the viewer.

The revealing Portrait of Ms. Ruby May, Standing lasted all of three days in London's Mall Galleries before it was taken down for being “too pornographic and disgusting.”

The gallery, run by the Federation of British Artists, claims to have received complaints about the painting and “as an educational arts charity, the Federation has a responsibility to its Trustees and to the children and vulnerable adults who use its Galleries and Learning Centre.” They didn’t offer an explicit explanation as to why McCall’s portrait was deemed pornographic, but the pubic hair seems to be a sticking point. The fact that it was replaced by another female nude leads McCall to believe that there’s even more behind the censoring of her work.

“I genuinely think it’s because Ruby meets your gaze. She’s not a shy, timid woman; it’s not pornography in the sense of ‘Here I am, come and get me!’ It’s very much an equal gaze and that was the whole purpose of the painting,” she tells Vocativ. “We had a lot of different poses and tried a lot of different things and what I liked about this one is that she’s your equal, she’s there.”

McCall (pictured) says her friendship with May has "been a real confidence-booster in terms of what women can be and perhaps should be in terms of their self-confidence and their sexuality."

McCall was invited to submit another piece but declined the offer (“I do have some still lifes with one or two sex toys in them,” she jokes). She says doing so would be tantamount to agreeing that the original painting was indecent. Instead, she’s launched a Twitter campaign using the hashtag #eroticcensorship, and is encouraging people to discuss the work and the ensuing controversy.

“The whole point of the piece is what Ruby May has to say about her sexuality. I’m trying to get people talking about it,” she says. “So by removing that artwork you’re effectively removing the opportunity for people to look at it and discuss it. But with a Twitter hashtag campaign, I thought at least we can try and discuss the topic in a different forum.”

People have rallied behind McCall on Twitter, using the hashtag #eroticcensorship

@mallgalleries Female nudity's fine as long as it doesn't involve pubes or tattoos? Are you offended or just grossed out? #eroticcensorship

Warmed by the generous response from strangers who are rallying behind her work and condemning the actions of Mall Galleries, McCall is planning an open studio event so people can view the portrait and engage in discussion. She also has tentative plans to launch her own group show, which will include artists whose work explores female sexuality and eroticism.

“I’m actually really rather happy that this has happened because it’s proved to me, in terms of the artwork and the topics I’m trying to address through it, that there is a debate to be had,” she says. “It obviously does trigger responses from people. And I’m really interested to see where that debate goes.”