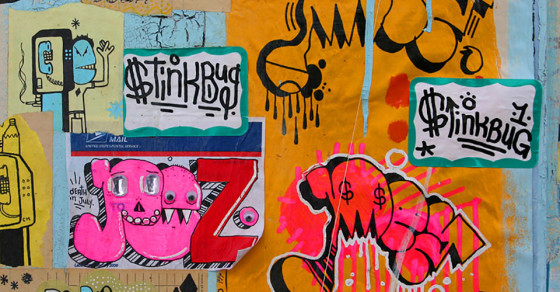 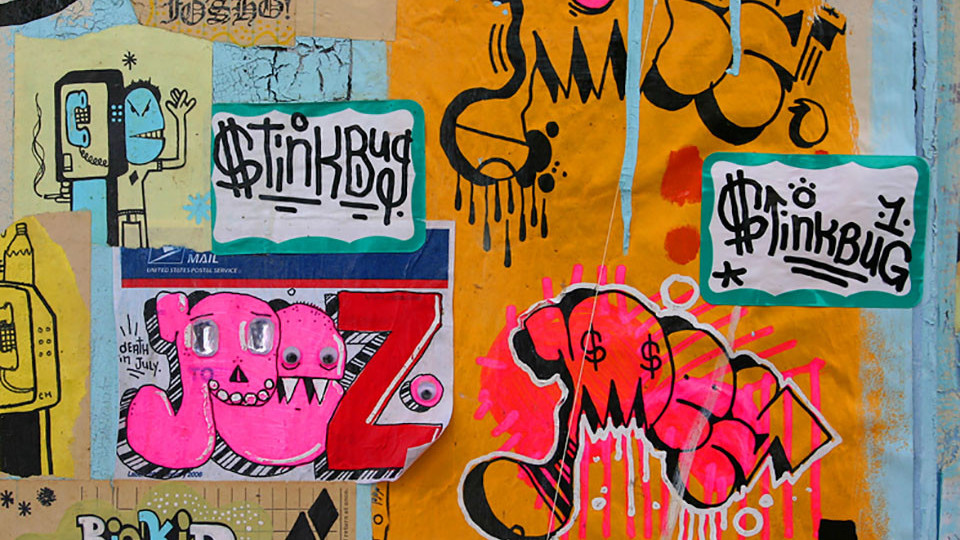 Stickers have long been mini canvases for street artists to test out their latest scribbles, stencils and drawings. “Sticker bombers,” as they’re called, don’t hang from the sides of buildings with spay cans, like graffiti artists did in the ’80s. They create their art at home or seated at a bar, and then tag everything from street signs and poles to bar bathroom mirrors, train station ads and dumpsters –wallpapering as much of their world as they can.

President Obama's likeness stenciled on a USPS Priority sticker and slapped on an outdoor wall in Austin, Texas.

Or drawings of hotties.

Topless beauty is deputized on her rear and ready to be mailed.

Or a push for political change.

Hyper-realized sticker with a boy and Buddha resting on his shoulder.

Some cities, like New York and Portland, Oregon, have become sticker meccas. “We have stickers all over the place here,” says Sgt. Pete Simpson of the Portland Police Department, where “slap-tagging” remains a misdemeanor offense. “Generally, they’re slapping the stickers on windows or street signs.”

In the last few years, sticker bombing has taken on some new dimensions. Instagram has become a popular place to showcase new slaps. The New York artist Faust has 20,000 Instagram followers that check in daily for his latest pieces featuring stylized calligraphy.

Sticker art is also going upscale, migrating from the streets into the galleries. Places including The Fridge in Washington, D.C., and the Anonymous Gallery in New York have featured sticker art shows in the last year.

But at some shows, there’s sticker drama. A sticker crew in Houston dropped out of a show titled Peel This at the 713 Inc. art gallery in May after discovering that a rival’s work was going to be featured in the same show. “We’ve done a lot of graffiti shows, and there’s always an issue. Rarely does it go over well because there’s always one artist who isn’t cool with another artist,” says the gallery’s owner, Rusty Azios.

Stacks of stickers amassed when Brass Knuckle Crew put out a request during an art show at Ivy House Studio in Brooklyn, N.Y.

A Houston artist who goes by the name Thieve stopped making screen-printed T-shirts earlier this year and switched over to stickers full-time. Every few days, he walks the city’s busy Westheimer Road slapping stickers adorned with his signature primitive, elongated cat skull onto street signals and signs. “It’s the perfect spot because there’s lots of traffic and you’re guaranteed to be seen,” he says.

Does he worry about the cops? “If they give me trouble, I’ll say it’s a sociology experiment and that it’s just a sticker that can be peeled off. If I have a spray can, I can’t talk my way out of it.”

A street sign in Portland, Oregon, is defaced with a Christopher Walken sticker.

In sticker art, permanence is key—the longer-lasting the sticker, the better the art. Thieve recently bought a $2,000 thermal transfer printer that uses a heating process that makes the ink more indelible, and plunked down $700 for a pack of 4,000 high-grade polyester stickers that, he says, retain their adhesiveness for “three to five years outside,” through rain, wind and snow.

A streetlight gets bombarded by stickers.

Mind-bending collage sticker artist HesherPark from Portland, Oregon, was one of the big names gifting stickers to an art show in Houston, Texas.

Thieve has added a twist to his repertoire to make his stickers even more durable: magnets. By hand, he cuts squares on a white roll and silk-screens his flattened characters to the magnet in the same way a T-shirt is printed.

Thieve’s grand plan is to toss them on big highway signs. “In the adhesive game, you’re limited to what you can reach. But with magnets you can just toss them up and they stick. They never get removed.”

Thieve's process to dye cut his characters and fuse them to magnetic sheets.

Magnets, for sure, can make sticker art last longer, but technology has also helped. A company based in Hong Kong called Egg Shell mimics the “Hello My Name Is” tags, but its version is almost indestructible. The product is aimed at people using packing boxes, but taggers are buying, too.

The mystery material is based on industrial strength stickers that a rep named Stan tells us through email “has been out in the market for ages.”

“It was originally for security purposes,” he says, referring to the kinds of labels dotting airports, hospitals and other sensitive locations where labels are meant to be forever.

Egg Shell says it is shipping dozens of its sleek packs to graffiti artists in France, U.K., Canada, Australia and Asia. Try to scratch them off with a fingernail or even an X-Acto knife and Stan says the material beads but barely budges.

“I’ve seen people putting hours of work to get rid of them.”