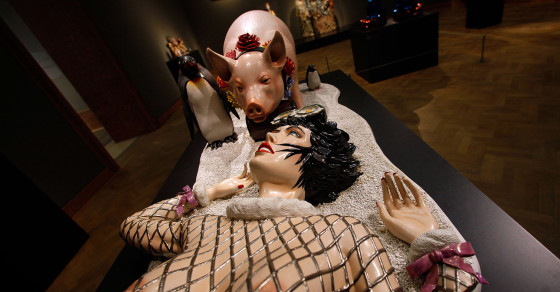 Jeff Koons Sued For Ripping Off Other Artists—Again

In 1985, French clothing brand NAF NAF released a print advertisement for its autumn-winter campaign showing a woman with a short, shaggy bob lying back in the snow while a pig with a St. Bernard-issue neck barrel sniffs at her. Three years later, artist Jeff Koons created four identical porcelain sculptures of a woman in the same position, also accompanied by a pig with a barrel around its neck.

Called “Fait d’Hiver, 1988,” one of Koons’ four works sold for $3.7 million back in 2007. It is this work that sits in Paris’ famed Georges Pompidou Centre, and it’s the same one that a French bailiff photographed last week after adman Franck Davidovici initiated legal action against the artist for blatantly stealing his work. (For a little extra oomph, the words “fait d’hiver” also appear on the ad.)

Franck Davidovici conceived of the image for this 1985 NAF NAF campaign.

It’s yet to be revealed why Davidovici waited until now to go after the artist, though he’s not the first. Koons has a history of appropriating others’ work: First, photographer Art Rogers accused Koons of copyright infringement after he created a sculpture based on a photo Rogers had taken of a couple holding a bunch of puppies. Koons claimed it was fair use by parody, and lost. He also lost a case after he used an image of Odie from the Garfield cartoon, and won another after a photographer sued him for using part of one of her images.

He doesn’t, however, appreciate it when others appropriate his work. Koons sued a San Francisco store and gallery in 2011 for selling balloon dog bookends—reminiscent of one of his most well-known works. He dropped the claim after the defendant responded that balloon dogs don’t belong to Koons, or anybody.

“As virtually any clown can attest, no one owns the idea of making a balloon dog, and the shape created by twisting a balloon into a dog-like form is part of the public domain,” wrote the store’s lawyer, Jedediah Wakefield.