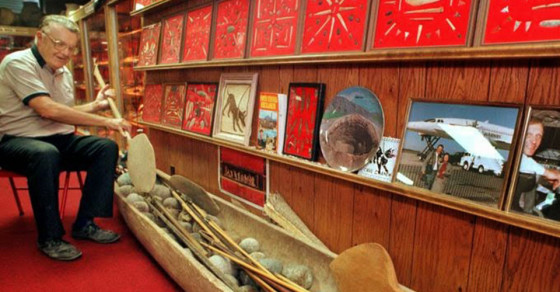 Why The FBI Is Investigating a 91-Year-Old Nuclear Engineer
By M.L. Nestel

Why The FBI Is Investigating a 91-Year-Old Nuclear Engineer 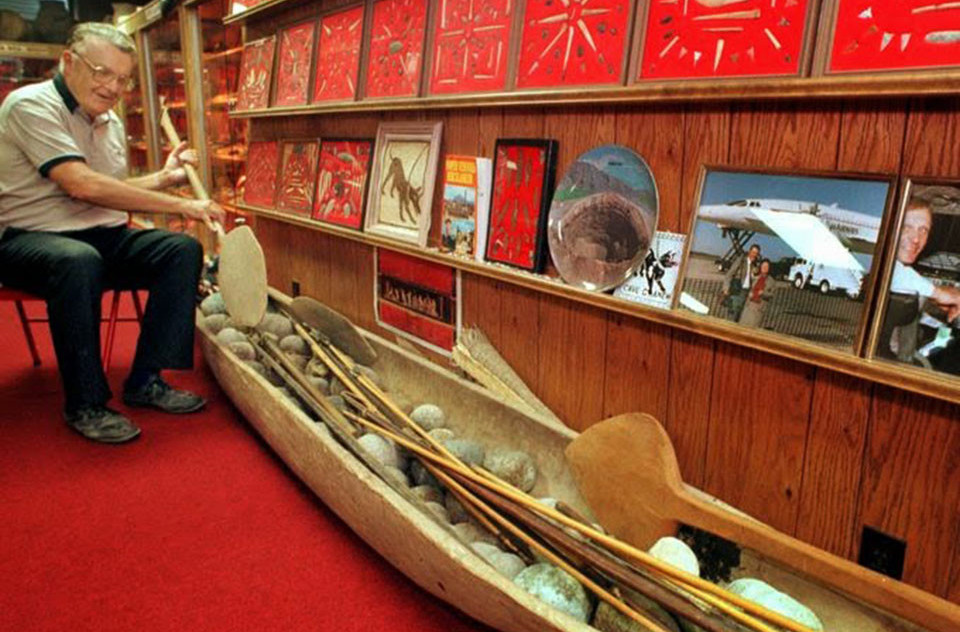 This past April Fool’s Day in Waldron, Indiana, a cavalry of FBI agents swarmed the farm where 91-year-old Don Miller was born and still lives today. Miller leads a pretty simple life: He practices the organ and sometimes makes calls on his ham radio, but he rarely leaves his house except to go to church. He is beloved by his neighbors.

Not exactly the typical profile of an FBI target.

But Miller wasn’t always this much of a homebody. Over the course of 60 years, he has traveled the world, picking up a wide array of art treasures and relics. Though the collection isn’t well-known outside central Indiana and Miller’s social circle, his thousands of items include: ancient arrowheads and Jivaro shrunken heads from South America, petrified wooly mammoth tusks, the egg of a T. rex, pottery from Hopi and Zuni tribes, an Egyptian sarcophagus and a Chinese terra-cotta soldier.

“I was blown away,” says Larry Zimmerman, an anthropology and museum studies professor at Indiana University who joined the FBI investigation and saw Miller’s pieces for the first time. “It’s a huge collection for a private individual.” Zimmerman says some of Miller’s pieces rival the Native American collections of many museums.

When the FBI came last month, they brought dozens of agents, art crime experts, archeologists and artifacts specialists. Spending several days scouring his house, they pitched a massive yellow tent on Miller’s property for about a week to examine his artifacts. They wound up carting away hundreds of pieces for further inspection.

At a time when there’s more scrutiny than ever on the provenance of art and the pedigree of the collector, Miller is a throwback to a time when you didn’t necessarily need to be wealthy or connected to pick up valuable pieces, and you didn’t need to be an archaeologist to get access to interesting artifacts. You might call him Indiana’s Indiana Jones.

Miller got the collecting bug as a kid, picking up arrowheads that he found walking around in the fields, and it became his chief passion as he got older. He gathered up artifacts when he went on church missionary trips overseas, and during his vacations. But Miller didn’t always collect the conventional way. Instead of making purchases from local collectors or galleries, he sometimes went on digs—often digs that he had brokered with local officials. One longtime friend and neighbor, Amy Mohr, describes how Miller prepped for one trip by stuffing an entire a suitcase full of cigarettes that he used as barter for precious goods. “He goes all over the world and is good at talking to the locals to find this stuff,” she says.

When we called Miller’s house a couple of weeks ago to find out more about his art trove and the FBI’s interest, he answered the phone but then said he wouldn’t be available to talk. At some point soon thereafter, his phone number was disconnected. But a handful of Miller’s friends, interviewed by phone, have helped shed light on how he acquired his art and other defining moments in his long life, including his work on the atomic bomb.

A couple of the people we interviewed say Miller sometimes ran into hairy situations during his artifact-collecting trips to more than 200 different countries. He even had his own Raiders of the Lost Ark moment: One time, in the ’70s, he encountered the Libyan military when he was on a dig, says Rick Bolt, who worked with Miller, a nuclear engineer, at the Naval Avionics Center in Indianapolis, which later became Raytheon. “They were in western Egypt at some ruins, and the truckloads of people in his expedition were heading down this road, and all of a sudden the military ambushed them.”

They were held at gunpoint and interrogated for several hours, their passports snatched, Bolt says. “They thought they were CIA and trying to infiltrate their country,” he says. The soldiers eventually released Miller and his team, but warned them, “We don’t want to see you again or it will not be pleasant,” Bolt remembers Miller telling him.

Another time, Miller was stopped with keepsakes and forced to hand them back. In 2004, he managed to grab lemon-sized cannonballs from the citadel in earthquake-ravaged Haiti during a missionary trip. But when Miller tried to bring them aboard the plane on his flight back, they were confiscated. “They said, ‘We know what these are, and you can’t have these.’ He just let them take it,” says Mohr, who was on the trip.

During the decades that Miller has been traversing the world in search of rare items, the laws around collecting antiquities have changed. In 1990, the federal government passed the Native American Graves Protection and Repatriation Act, which says that anybody caught trafficking in Native American cultural items can get slapped with heavy fines and a year in prison. With a second offense, the term of imprisonment jumps to five years.

The law, which is in part an effort to prevent grave-robbing of Indian burial sites, also requires anyone taking possession of funerary objects to get consent from the tribe’s kin or its official governing body.

Miller’s huge collection, much of it kept behind glass cases, fills up his entire basement and spills over onto the ground floor of his house. The FBI won’t say whether there was something specific that sparked the investigation, but Zimmerman says one thing that piqued the government’s interest was the human remains. They include the skeletal body of an Indian chief—under glass with the label “Sioux warrior 19th century”—as well as some fractured skulls and a bunch of femurs.

“If they’re Native American human remains there’s no way he should be owning those,” Zimmerman says.

Miller isn’t someone you’d likely pick out on the street as a serious collector of artifacts. He’s about 6 feet tall, leanly built and reserved, and looks more like a former high school football coach than an armchair archaeologist. “To get Don to talk you have to engage him in conversation,” says Jack Spaulding, who has known Miller since childhood and has spoken to Miller and his wife, Sandy, in the days since the FBI surrounded his farm. “He’s not flamboyant or outgoing. He’s not the type of person to bust into the room and say, ‘Eureka! Look what I’ve found!'”

Miller with his signature outfit and his ham radios

To people who know him, Miller is instantly recognizable by his signature attire—he wears the same thing almost every day: a red polo shirt with his ham radio call sign, W9NTP, and blue pants. “When he went to buy the shirt he kind of liked it so much he bought a dozen of them,” Spaulding says. “He wears a comfortable pair of blue pants with that shirt, and he has a dozen pairs of those pants, too.” Spaulding says Miller changes out of those clothes only on Sundays for church, when he dons a tie and sport coat while playing the organ for his congregation.

Over the years, Miller has gladly opened his collection of artifacts to any comers, friends say. “He gave tours to everybody, including the Boy Scout troop,” says Mohr.

How much of his collection he could now wind up losing is unclear. A spokesman for the U.S. Attorney’s Office in Indianapolis, Tim Horty, says the purpose of pursuing Miller wasn’t to bring charges against him but to “recover as many of these artifacts as we can and repatriate them.” Horty says, “We want to return them to who we think are the rightful owners.” The FBI has already begun contacting Native American groups about Miller’s collection; both the FBI and the U.S. Attorney’s Office say Miller has been extremely cooperative the whole time.

Spaulding says the timing of the FBI pursuit of Miller is odd, as most of his pieces have been behind glass for years. “Something must have really been a major concern, and that’s why they went in the way they did. Something they thought was inappropriate.”

In fact, it appears that’s exactly what happened—and the item that initially concerned the FBI had nothing to do with Native American art.

At 22, Miller, then an army engineer, was chosen to help develop the first nuclear bomb. One of his jobs, according to Bolt and Dave Zeph, who also worked with Miller at the Naval Avionics Center in Indianapolis, was to build closed circuit TVs for the first test detonation, known as the Trinity test, on July 16, 1945. It would be a way for senior military officials to try to gather as full a picture as possible of the explosion before the cameras vaporized.

The experience of working on the bomb scarred Miller, and in the 1950s, convinced the world was going to end, he built a concrete bomb shelter with his own hands, complete with electricity, air filtration and running water. “He was a doomsday prepper,” says Bolt.  “He was prepared for three to four weeks underground.”

The bomb shelter is part of his basement, where in addition to the Native American artifacts, Miller has some keepsakes from his time working on the Manhattan Project. About 10 years ago, Miller invited Richard M. Gramly, a Harvard-trained anthropologist, and a friend to visit his home.

When Miller took Gramly downstairs, it wasn’t the art that grabbed his attention. “There was a patch of the army unit to which he belonged,” Gramly recalls. “It had a mushroom cloud with a lightning bolt coming out of it.” Behind the mushroom cloud patch, he says, was a literal bombshell. “On the shelf was a triggering device for an atomic bomb. The first bomb [Little Boy] that blew up Hiroshima was made exactly from those components,” says Gramly.

Patch from the Manhattan Project

He said the half-hollow sphere was the size of a softball and the central sphere was the size of a golfball. “It was heavy uranium, which is heavy metal. One cannot confuse uranium isotopes with lead. Don Miller, in my opinion, did not have a copy of a trigger on the shelf of his display case in his basement relic room—rather he had the real McCoy.”

The discovery shook Gramly. “To my horror, I see the man has a switch,” he says. “No private person should have this device.”

The night ended and Gramly kept what he saw to himself. Later, though, a friend forwarded him a photo (likely taken without Miller’s consent) of the switch. Convinced that it could fall into the wrong hands and that someone could potentially use it to make a dirty bomb, Gramly decided to call the authorities. “I hate to rat someone out, but it’s no longer a private thing.” He reached out to a relative of his who was a colonel at the Pentagon, who told Gramly to contact the FBI, which he did. That was in 2008.

Neither the FBI nor the U.S. Attorney’s Office in Indianapolis will comment on the Gramly matter. But both offices in Indianapolis confirm that federal agents visited Miller’s house 18 months to two years earlier on an issue unrelated to the Native American artifacts. That visit, potentially to look into Gramly’s tip about the bomb components, could have possibly triggered the action at his farmhouse last month and the deeper look into Miller’s collection of artifacts.

Gramly is convinced he did the right thing: “Miller is getting to an age where he could die any day. How would you like to go to a yard sale and buy that nuclear device for 50 cents?” he asks. “I feel like I’ve done my duty.”