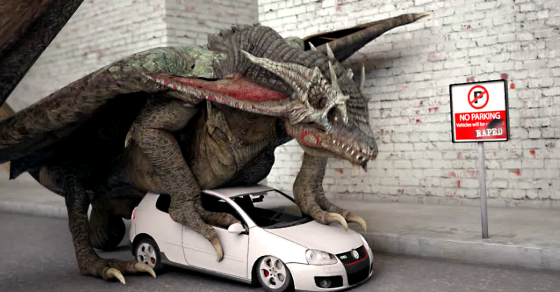 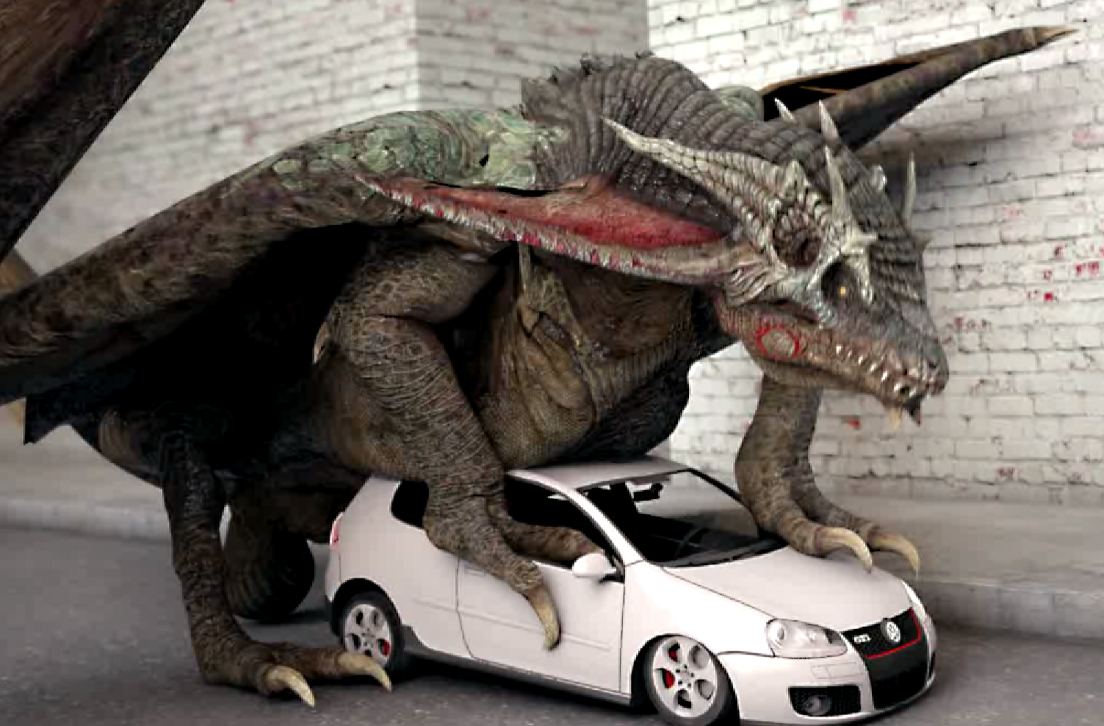 A few years ago, images of deviant monsters mounting, pounding and punishing automobiles began cropping up online, eliciting a mix of wonder and gleeful disgust. And not unlike the dreaded super clap, it’s now become clear that Dragons Fucking Cars simply won’t be going away. In fact, the half-genius, half-idiot art meme is flourishing.

What started out as a series of crude drawings from a furry artist with a super-specific fetish eventually transcended its humble origins and blossomed into a minor art movement. Like all memes, Dragons Fucking Cars bubbled up in the sewers of 4chan and was soon co-opted and legitimized by the relative sophisticates at Reddit. The genre reached its aesthetic apex in an X-rated 3D GIF of a dragon violating a Volkswagen (which might even give the Leonardo da Vinci of GIFs a run for his money). That animation, created by a Reddit user tactfully named dragoninmyanus, helped draw attention to an obscure and under-appreciated subreddit that had been devoted to the genre since 2012. But it did not mark the end of the game. Not by a long shot.

The official Dragons Fucking Cars subreddit has been growing steadily ever since and is now on the cusp of reaching 10,000 subscribers. With that milestone quickly approaching, we reached out to one of the group’s biggest cheerleaders—and most prolific posters—to lend us some insight on the meme’s ever-expanding appeal. Daniel Denta, aka CLXIX, has spent the last year spreading the gospel of vehicular dragon-cest, which has now expanded to include dragons laying pipe on Pixar vehicles and Star Wars Walkers, among other delights (did we mention “Dragon WRECKS Tie Fighter“?). The 28-year-old artist based in Florida has used his craft to create a vast and motley collection of DFC prints, many at the request of fellow redditors (Denta is available for commissioned work, should such a need arise for you). As an added bonus, he’s also offered to draw a dragon fucking the shit out of the car that belongs to the subreddit’s 10,000th subscriber.

A seven-headed hydra has its way with a Hydra Schmidt Coupé Grau.

So what excites you about Dragons Fucking Cars?

It suggests something about the bestial nature of mankind. That he is both God and animal. He is the highest of all organic beings, the lowest of all spiritual beings and a resolution of these two opposites, driven by the primal desires for lust and reproduction. My work is more suggestive than explicit. I’m not some sicko. I don’t show any close-up shots of penetration or the dragon’s phallus. I like to focus more on the positions.

The most popular DFC image on the Internet is a GIF of a dragon violently penetrating a white Volkswagen. Its balls scrape along the concrete and its penis can be seen tearing up the interior. Too much?

It’s a great animation, hilarious and over the top. I don’t have any negative dispositions toward the more vulgar posts. And that one is a legend. From what I understand, it’s what essentially started this subreddit along with another series of pieces from a yip or furry artist from years back.

Forgive me if this is a stupid question, but does it have to be a car the dragon is fucking? Like what if the dragon’s fucking an industrial air-conditioning unit? Does that still work?

I don’t see why air conditioners, or other mechanical things, couldn’t be fucked. So long as it is a dragon fucking inorganic things, it is acceptable. Or even a Xenomorph. Or any type of monster fucking. Just not making love to an organic being.

Do the cars ever fuck the dragons? Or is that too weird?

I don’t play any part in that. In my craft, the dragon is the phallus and the car is the rose. I’m not judging those who like it the other way, but I want to keep my presentation more in the middle.

Putting the moves on Pixar's Mcqueen.

Submitted by yonis on /r/dragonsfuckingcars

How important is the make and model of a car that a dragon fucks?

The style of the dragon has to suggest something about the style of the car it is fucking. For example, I did a request for a Rolls Royce Phantom. So, to make it classy, I glitzed the dragon up with a top hat and long cigarette and monocle, like the monopoly man or some old-timey millionaire, and designed him short and stubby and called him the Penguin Dragon. When I did a request for an ’80s Camaro I had to make the dragon look metal to the bone.

Is there such a thing as “dragon-style”? How would you describe it?

Do dragons use lube?

A dragon may want to use lube if the car is rusty.

I have never masturbated to DFC. For me it is not a fetish, it is a satirical art platform and a good running joke. But I think there may be some people out there who are aroused by it, none that I know personally.

Is fucking between dragons and cars ever consensual?

In my art the act is always implied as consensual. That doesn’t mean it’s not rough and abusive.

What kind of a car would a chubby-chaser dragon fuck?

What kind of car does a dragon into MILFs fuck?

If you could, would you ever fuck a dragon?

Ouch, that would be painful. On the astral plane, however, I might experience some relation with all sorts of different spirits, elements or beasts.

If you were to get fucked by a dragon, what kind of car would you be?

If I were to get fucked by a dragon as a car, hypothetically, I would have to be the car that I drive, a Pontiac G6. It fits me perfectly. I would love to say a Ferrari or something exotic, but I don’t live up to that yet. I bought this car around Christmas, so Dragon Claus came by to fuck it.

Metal to the bone.