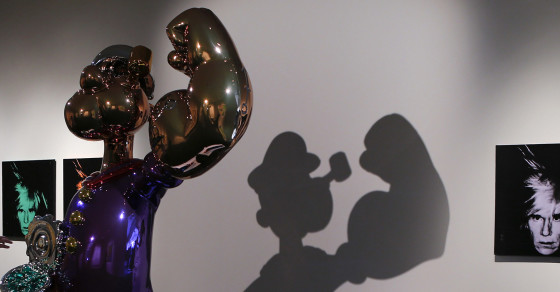 What a $25M Popeye Sculpture Says About the Super-Rich 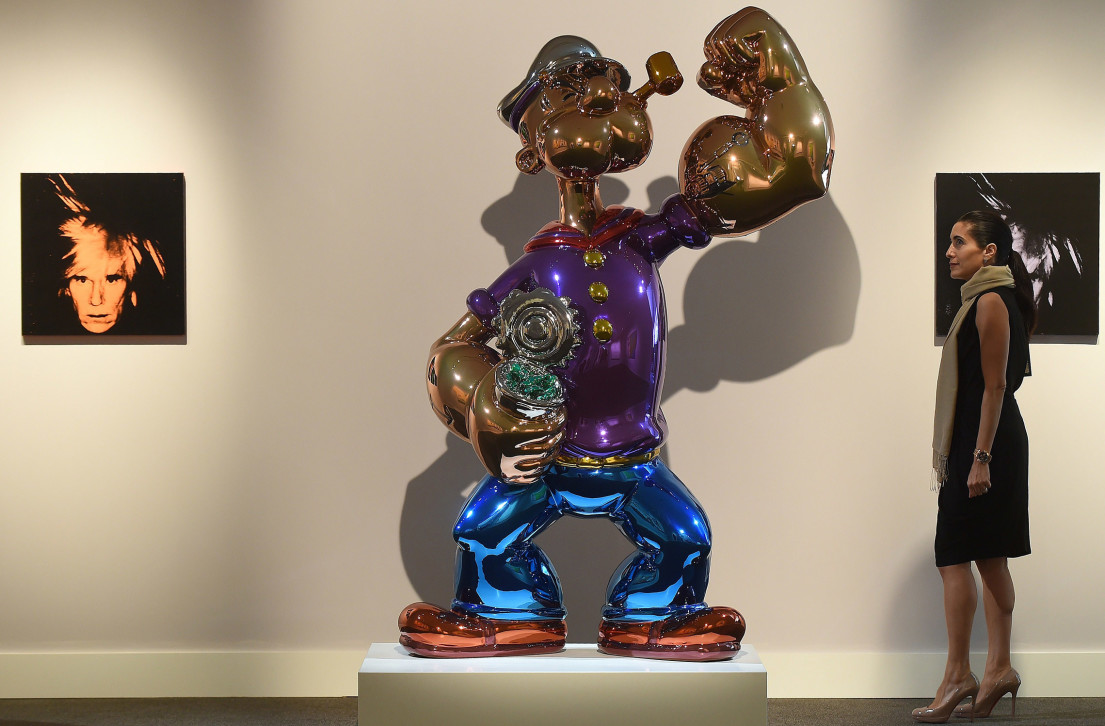 At a Tuesday night contemporary art sale at Christie’s, one of New York’s premier auction houses, a massive triptych by Francis Bacon sold for $80.8 million. Only a few minutes later, the gavel ended bidding at $62.9 million for Andy Warhol’s Race Riot silkscreen. Soon afterward, a work by famed Abstract Expressionist Mark Rothko sold for $66.2 million. And this auction—the most expensive auction in world history—was just the start of a series of top-rate contemporary art sales in New York, in what very well may become a groundbreaking week for a market that is “on fire.”

While contemporary art prices have escalated to new extremes in the past few years—”I do not believe there is a price ceiling,” says Andrew Renton, a U.K. curator and museum director—perhaps the best example of this unusual price distention is that someone is about to dump $25 million (or more) on a giant stainless steel recast of cartoon favorite Popeye Wednesday evening at Sotheby’s. (Update: it sold for a shade over $28 million to casino owner Steve Wynn.)

The estimated price on its own is mad, but it’s even crazier when you consider that its producer is still alive; the piece, titled Popeye, is the work of Jeff Koons, the world’s most profitable living artist and so-called “boy wonder.” Between 2009 and 2011, Koons designed only three editions of the 7-foot sailor, which weighs 2,000 pounds and is armed with a can of green steel spinach, and this is the first time one of the three works is available for purchase at an auction. “He is the ultimate American hero,” Alexander Rotter, co-head of Sotheby’s Contemporary Art, says of Popeye in a pre-auction preview video. “It is the ultimate American dream.”

Of course, not all American dreams cost $25 million, and most don’t come in the form of a life-size, steel cartoon character. (The same sort of thing could be said for another Koons piece, J.B. Turner Train, which sold for $33.8 million Tuesday night.) So Vocativ reached out to Olav Velthuis, sociology professor at the University of Amsterdam and author of Talking Prices: Symbolic Meanings of Prices on the Market for Contemporary Art, to learn what Popeye says about the contemporary art market and why buyers are desperate for a piece of it.

Why is this particular piece priced the way it is?

Well, first of all, I’m not sure if I can say if it’s priced high or low. You could argue that, for a Koons piece, the price estimate is actually quite decent. Pieces by him—the balloon dog and the tulips—were sold for much more money; the balloon dog was twice as expensive. [It sold for $58 million in November.] In that sense, you could say [Popeye] is not very expensive. Of course, a price estimate of $25 million is not exactly nothing either. What is special about this work is that it’s completely new.

So it was a secret?

Not exactly. It was shown at a museum in Frankfurt a couple of years ago. But it’s the first time a piece from this series has come up at auction;  it’s been shown, but not very much. The other thing is it’s a work edition of three and the other two owners are Larry Gagosian and Steven Cohen. The buyer of this piece knows he’ll be in very good company.

Who do you think will buy it?

It’s hard to say. Popeye being such an icon of American culture, you would at least expect it to be an American collector. But even there you cannot be sure. There are a couple of people who are active in the Koons market, but the most well-known people have actually been selling lately, not buying.

The thing about these works by Koons, and probably this piece in particular, is that it’s strikingly colorful. Usually there are not that many colors in Koons’ pieces. Also, and this is not what sets it apart but what’s important for its price, is that it’s a big piece. The catalogue text emphasizes how much it weighs. It’s a massive, colorful sculpture. The owner of this piece will have a big, eye-catching piece in his penthouse or his private museum.

Can you speak to Popeye as an icon?

Well, there’s few things that are interesting about this. One is that Koons himself once remarked that this piece, and Popeye, is a self-portrait. A hero who is able to do everything, who is powerful, who is strong. And of course there’s the whole thing that Popeye is an icon of popular culture. This piece exemplifies a much wider phenomenon in art markets these days, and it has to do with democratization—the idea that you no longer have to have elitist tastes to appreciate modern and contemporary art. Koons doesn’t like the idea that art is used as a dividing line in society. He likes the idea that everyone is able to appreciate his art. Then there’s a third part, and that is more related to art history: It’s not the first time that Popeye has popped up in contemporary art. Andy Warhol and Roy Lichtenstein depicted him as well. So Koons is in a longer historical tradition in pop art in particular, and that gives him a lineage or heritage.

So if Popeye is part of this lineage, then why wouldn’t it demand the same price as the balloon dogs or tulips?

For me, one irony about the Koons market is that the real art-historical importance is not with the recent work, it’s much more with the works at the beginning of his career from the 1980s. There’s another work that’s set to come up at auction that nobody’s talking about: Three Ball 50/50 Tank, which is an installation of three basketballs floating in a water tank. That’s the work that’s always featured in art history books. Koons, one of the first to engage with commodity culture, to make sculptures out of commodities, those were seen by art historians as innovative. But ironically, its price estimate is much lower (between $4 and $6 million). A lot of the works making the record prices I think are much less likely to end up in art history books. They’re attractive to the markets because they are big and colorful and easy to digest, and they have a lot of visual power. But they don’t necessarily have all this importance in the eyes of an art historian.

Another reason why this work could be priced a bit lower is that it hasn’t been talked about a lot. It hasn’t been written about a lot. If you look at the catalogue notes, important types of pieces usually have a long list of entries of museum shows, catalogue texts, articles in art history magazines. This one has very little of that. It has very little of what we in sociology call consecration—there haven’t been any art historians or curators yet who say this is a great piece.

What else is going for prices as high as these?

Christie’s has another triptych by Francis Bacon. There is an important piece by Gerhard Lichter. There’s the Andy Warhol piece. There’s the Mark Rothko. It’s a mixed bag. What these pieces do have in common, though, is that they all have this iconic quality, this wall-power quality. They’re all big pieces, all quite rare to come up at auction. But in terms of aesthetics or visual qualities, they really are quite different. It’s not like there’s one type of work that’s doing particularly well. What you do see is that all the attention is going to the contemporary art auctions.

A Christie's employee looks at Three Studies for a Portrait of John Edwards by Francis Bacon during a photo call in central London on April 11, ahead of an auction in New York.

Do you expect prices and trends to continue this way?

I’m not in the business of predicting prices, I’m looking at what’s really underlying these high prices. The basic argument is two-fold: One is that the inequality of income and wealth has been increasing over the past decades, worldwide. Why? Well, because in a lot of countries all over world—not just in the U.S., but in emerging economies (China, Russia)—the number of billionaires, or multi-millionaires, or what we call in the art industry “high-net-worth individuals,” has been increasing tremendously. In a little bit more than a decade it has quadrupled. The number of people for whom paying $10 or $20 or $30 million for a work of art basically doesn’t mean anything—that type of buyer, they have become much more numerous. I always do this computation: If your net worth is $10 billion and you spend $10 million on a piece of art, it doesn’t mean anything more for you than buying a new pair of shoes means for an ordinary American or European citizen.

Honestly, it’s the same for them. They don’t feel it. And this is partially because the art market has been very clever in attracting this wealth and because these people are particularly eager to spend money on things that will confirm status. They have developed a taste for art. It’s a combination of two things—the number of people who are extremely rich and their tastes, their leisure patterns. It’s much more favorable toward modern and contemporary art. That’s what’s making these prices possible. Once or twice per year, this is the moment when the status hierarchies among the super rich are being established.

One thing I would add is that, deep down, the person who is going to buy this also, somewhere, understands that this is really a gimmick. These people are basically showing that they’re so rich, they can just destroy their wealth. We can spend a couple of dollars for a gimmick; they can spend $30 or $40 million for a gimmick. That really shows that you are rich.