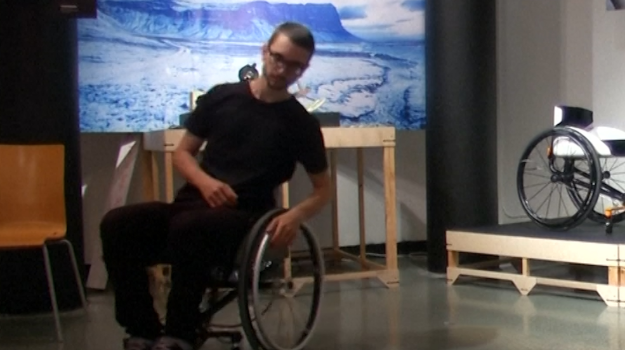 A Swiss design graduate has developed a new wheelchair system that allows paraplegics to manoeuvre by using only their upper body movement.

Reto Togni presented his Reagiro wheelchair at the Royal College of Art (RCA) graduate exhibition in London in June. Unlike traditional wheelchairs, the Reagiro’s backrest pivots left and right according to which way the user wants to move, allowing the two small caster wheels to travel in the same direction.

Togni compares traditional wheelchairs to shopping carts, in that they have no steering system. They also force the user to exert more energy than necessary, since changing their direction requires users to brake on one side and put more energy on the other to alter the route. Togni’s new prototype uses cables to pull and push against steerable front wheels, similar to a brake cable on a bike. Steering then becomes “effortless” and safer by leaning with the upper body and using less physical exertion.

The Reagiro still needs funding before it can be brought to the consumer market, but could soon become an alternative to traditional wheelchairs.