Would You Let Your Child Dance Ballet 650 Feet In The Air?
By Vocativ Staff
JAPAN 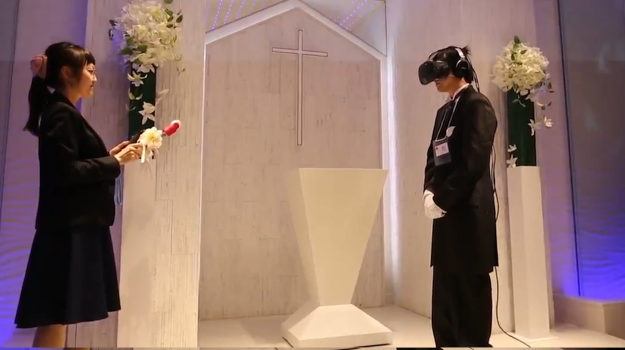 With the video game market becoming more and more crowded, the next gimmick might not be better visuals and technology but something more intangible: love.

Japanese adult game developer Hibiki Works recently performed a VR assisted wedding between a man and the anime character of his dreams. The wedding – which actually took place in a chapel in Tokyo – was part of Hibiki Works’ promotion of their upcoming game “Niizuma: Lovely x Cation.”

Niizuma means “new wife” and thus the marketing strategy may not feel like too much of a stretch, but it does touch upon a growing trend in Japan: 15% of Japanese men had admitted to “falling in love with a meme or game character.” This new craze is alarming for some, especially those who point to Japan’s steep population decline and low birth rates over the years. Men retreating from human relationships to cultivate virtual flings is not uncommon, and companies like Hibiki Works are already capitalizing on this new phenomenon by creating a virtual love industry.

Between April 28 and May 28, the creators of Niizuma collected applications from fans who desired to be grooms to one of three virtual brides: Yuki Isurugi, Aiko Kurihara or Nono Naruse. An undisclosed number of grooms were chosen to be wed on June 30, and with the aid of a VR headset playing the “E-mote VR” character animation software, man and virtual woman were united in holy matrimony. Each marriage was performed privately and lasted about five minutes. The ceremonies were even performed by an actual priest.

Hibiki Works offered the marital service simply to advertise the game’s release, but the very nature of the game is one of virtual courtship. Human players cultivate romance with the object of their affection in the beginning of the game, and the gameplay experience carries the human through each relationship milestone, which even alludes to a physically intimate married life.

Last year, the number of births in Japan dropped below one million for the first time.