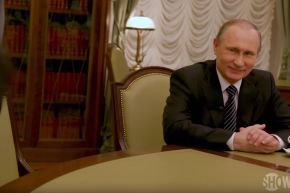 Russian President Vladimir Putin’s rare media blitz with Western journalists displays his misogyny and homophobia, his disdain for democracy and his purported disinterest in the ongoing FBI investigation into Russia’s meddling in the U.S. elections. But it’s being celebrated by Russians who claim that Putin has finally conquered the hearts and minds of Americans by holding up a mirror to their own “hypocrisy.”

“Putin jokes with NBC reporter, saying she ‘could be arrested’ in U.S. for contacts with him,” read a recent headline in Tass news agency, referring to the two separate interviews Putin recently gave to NBC News correspondent Megyn Kelly.

Russia’s state-owned media and even many independent newspapers are basking in the idea that Americans are devoting their time to thinking about Putin, and lauding the leader for his thinly-veiled insults about what his interviewers don’t understand.

When asked about Russian interference in the 2016 election, Putin told Kelly he didn’t “want to offend anyone, but the United States, everywhere, all over the world, is actively interfering in electoral campaigns in other countries. Is this really news to you?”

“This is classic Putin judo, taking what the opponent presents, and putting those issues against him,” said Ariel Cohen, a senior fellow at the Atlantic Council. “Putin is now trying to expose himself and Russia in the best light possible, while he presents America as an aggressor and Russia as a victim.”

Putin is also taking the opportunity to boost his anti-liberal strongman persona with jabs at women and the gay population which are meant to reach his home base as well as his fans among alt-right audiences in the U.S. and Europe, said Cohen.

“I am not a woman, so I don’t have bad days,” Putin said to Oliver Stone, whose four-part Showtime documentary premiered on Monday. “I am not trying to insult anyone. That’s just the nature of things. There are certain natural cycles,” he adds in a not-so-subtle nudge at menstruation as he gave the American filmmaker a tour of the Kremlin’s gilded throne room. Putin also laughs when asked if he would shower in a submarine next to a gay man, saying “you know, I’m a judo master.”

Putin first started granting interviews in May, just after U.S. President Donald Trump fired FBI chief James Comey and as the FBI ramped up its investigation into the U.S. president’s potential collusion with the Russians during the 2016 campaign. The first media appearance came in what was meant to look like a spontaneous coincidence. Just as Putin left a locker room dressed in full hockey gear, he ran into both his press secretary Dmitry Peskov and CBS News correspondent Elizabeth Palmer.

When asked how the Comey dismissal might affect U.S.-Russian relations Putin told Palmer, “Don’t be angry with me. We have nothing to do with that.” He then said: “You see I am going to play hockey with the hockey players? And I invite you to do the same,” before scoring six goals in a game that his team won 17-6.

Putin is exploiting a long sought-after Western limelight to snark at journalists from news outlets he and most Russian journalists have described as “anti-Russian.” Since May 10, he has talked with NBC, Bloomberg, and the French newspaper Le Figaro, with whom he spoke after French President Emmanuel Macron called the Kremlin-controlled media “organs of influence and propaganda.”

But of all the press appearances, the Showtime documentary series hosted by Oliver Stone titled “The Putin Interviews,” has been the most dramatic. Excoriated by American press for being little more than a love letter to Putin rather than a piece of hard-hitting journalism, it gives the Russian leader a platform to spout conspiracy theories — such as claims of having evidence that Americans directly supported Chechen terrorists against Russia waged two brutal wars — with minimal or zero pushback.

Stone even told the BBC on Monday that “perhaps” Russia used him to send a message to the U.S., saying, “it is certainly an elaborate ruse, but he knows that I am not going to change American policy but what I’d like to do is contribute to a consciousness of what he’s saying.”

Gustav Gressel, a senior research fellow at the European Council on Foreign Relations, said that especially Stone’s project has been a godsend for Putin, who has consistently sought a mouthpiece (all the better an American “insider journalist”) through which to convey the Russian party line: “Russia is a great power; don’t mess with Russia, or we will retaliate,” said Gressel.

“Putin has for years tried to tell the West, I’m not the shady kind of dictator you think you are portraying me as, while, at the same time, asserting that dissidents critical of the regime are trolls of the CIA,” said Gressel.

The state-backed news network RT went a step further to emphasize Stone’s (and therefore the Americans’) perceived meekness in comparison to Putin, in a recent headline that read, “When asked whether or not he will make a feature film on Putin, Stone replied, ‘I don’t think I would have the guts. Sometimes, after seeing the real thing, I’m not sure what else I can express.'”

Screenshot of the government-owned RT news outlet article, headlined, "A President Whom The Russians Love," shows Russian President Vladimir Putin speaking with journalist Megyn Kelly during an interview on the sidelines of the St. Petersburg International Economic Forum, June 3, 2017.

Putin’s rule, spanning 17 years, in many ways rests on the U.S.-Russia rivalry.

“Putin’s foreign policy of great-power revival is a major element of his popularity,” wrote Dmitri Trenin, the director of the Carnegie Moscow Center in an article in April. “The Western backlash against Russia’s assertiveness only helps consolidate that support.”

That foreign policy, and Putin’s personal crusade against the West and particularly the United States, reached a critical stage in 2014 when Russia intervened militarily in Ukraine and annexed Crimea in a move that spurred international sanctions, said Anna Arutunyan, the author of “The Putin Mystique.”

Surprisingly, though, “the surge of nationalism and the political capital that he amassed has pretty much held there since,” said Arutunyan. According to recent polls by the Levada Center, Putin’s popularity is above 80 percent despite a crumbling economy, ongoing diplomatic isolation, and the military quagmire Russians have found themselves in Syria.

The state-owned Channel One which will broadcast the Stone documentary series next week billed the TV event as a rare opportunity for the American journalist. Its website boasted: “Stone said no subject was forbidden.”

Like the myriad domestic and international crises Russia faces, it made no mention of criticism regarding Putin’s recent interviews. In the press and for Putin, they have been almost irrelevant to the more central story, which is that the rest of the world is reeling in dysfunction, but Russia remains united.

When asked by Stone if Putin wanted to be king, he replied, cryptically: “The question is to use the control that you have, to do it correctly.”