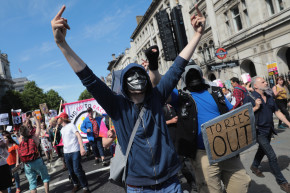 Hundreds of thousands of Brits are calling for Theresa May to resign rather than join forces with the Northern Irish DUP party, which opposes gay marriage and abortion

Protest against the Conservative party's planned alliance with the DUP — Getty Images
By Shira Rubin with Jacob Steinblatt
Jun 11, 2017 at 7:17 AM ET

Chaos prevailed on Sunday as Brits woke up to the baffling news that British Prime Minister Theresa May’s planned alliance with the right-wing Northern Irish Democratic Unionist Party (DUP) was, in fact, not officially happening, and that her role as Prime Minister remained in question just eight days before Brexit negotiations kick off.

May announced on Saturday evening that she had reached a “confidence and supply” agreement with the DUP, a party that many Brits had never heard of.  Many flocked to Google to learn about the party’s platform, and the DUP website even crashed on Friday on account of the deluge of curious visitors.

Then Downing Street and the DUP contradicted that very announcement, only five hours after it was published, saying that negotiations were, actually, still in progress.

Google Trends shows a sharp spike in searches for "DUP" since Thursday's elections.

Defense Minister Michael Fallon said on Sunday that the Conservatives were seeking an agreement with the DUP on the “big issues” like the economy and security, rather than a formal coalition.

“We do not agree and we do not have to agree” on social issues, he told the BBC.

With just 318 seats, May’s Conservative party fell short of the 328 total needed for a majority government in Thursday’s shocking snap elections. May’s Tory party would reach the needed majority if it is joined by the small, socially conservative DUP party, whose 290,000 votes and 10 seats in parliament could be a kingmaker in a national parliament representing the U.K.’s 65 million people.

A sense of turmoil has gripped the Brits since last week’s elections, which backfired on May and left her fighting tooth and nail for a position she had already won last year. In a post-election reshuffle, May reshuffled her cabinet to include some of her former enemies, in which she brought back her former adversary and rival Michael Gove as Environment Secretary.

Nick Timothy and Fiona Hill, aides who served as May’s co-chiefs of staff, resigned on Saturday amid accusations that they had mishandled the Tories’ election campaign. Over the weekend, there were increasing calls for May to do the same.

“Theresa May is a dead woman walking, it’s just how long she’s going to remain on death row,” former Chancellor of the Exchequer George Osborne said Sunday during a panel discussion on BBC.

More than 670,000 people have signed an online petition calling for May to resign rather than form a coalition with the DUP.

“Theresa May should RESIGN. This is a disgusting, desperate attempt to stay in power,” read the petition.

Tories: We've agreed with the DUP
DUP: We've agree nothing yet
Epitome of a Coalition of Chaos#DUPCoalition #itvnews
Another Tory Fib! pic.twitter.com/weWe9Cg1Vs

The militantly conservative, Protestant-linked DUP party opposes abortion, gay marriage, and the fight against climate change. At least one senior party member has defended creationism, the theory that the world was created by God 10,000 years ago, rather than evolution, and the party’s founder Ian Paisley once described the U.K. and its proclivity for western style dancing as “sinful.”

If you're wondering who the DUP are. Their manifesto is basically The Old Testament Bible with fortnightly bin collections.#dupcoalition

The Mail on Sunday reported that Foreign Secretary Boris Johnson was preparing to replace May as Prime Minister after the Conservative party’s disastrous election showing. Johnson called the report “tripe” in a tweet, in which he said he was supporting May.

Mail on Sunday tripe – I am backing Theresa may. Let's get on with the job

On Saturday, hundreds of people took to the street to denounce May’s plan to include the DUP in a parliamentary alliance, with many calling for opposition Labour leader Jeremy Corbyn to take her place.

Corbyn told the BBC on Sunday there could be another election this year or early in 2018 after the Thursday vote produced no clear winner.

“That might be a good thing because we cannot go on with a period of great instability,” he said. “We have a program, we have support and we are ready to fight another election campaign as soon as may be.”