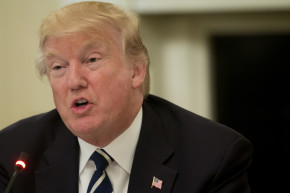 President Donald Trump speaks during a White House event on Thursday. — Getty Images
By Timothy Bella
Jun 09, 2017 at 8:11 AM ET

Trump’s early-morning tweet is his first direct response to Comey’s hearing and comes nearly a full day after the former FBI director described the full extent of his interactions with the president.

Despite so many false statements and lies, total and complete vindication…and WOW, Comey is a leaker!

The president also made mention of Comey having admitted to the Senate Intelligence Committee that he orchestrated a leak of documents to a friend in hope of it eventually leading to a special prosecutor for the Russia investigation.

“…and WOW, Comey is a leaker!” Trump tweeted.

The tweet came after Trump didn’t mention Comey’s name once in a Thursday speech to the Faith and Freedom Coalition and later ignored questions regarding the former FBI director’s testimony at a White House infrastructure event.

During the hearing, Comey said Trump and his administration chose to “defame” him and the FBI for describing the bureau for being in disarray. “Those were lies,” Comey said.

Before Trump’s tweet, Marc Kasowitz, the president’s legal counsel, said refuted Comey’s claims, adding that his client never asked the former FBI director to stop the investigation of former national security adviser Michael Flynn. The White House also defended the commander-in-chief, with Sarah Huckabee Sanders, the deputy press secretary, telling reporters that she was confident the president is not a liar.

Great reporting by @foxandfriends and so many others. Thank you!