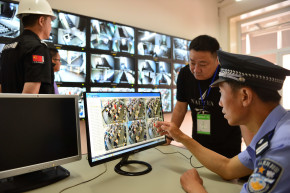 Chinese high schoolers took their annual college entrance exam as drones circled overhead this year, one of the many high-tech solutions to cheating concerns.

Students taking China’s high-stakes SAT-equivalent called the “gaokao” have been known to cheat in the past. Last year, some students even used hidden communication devices as extreme as earpieces.

This year, education authorities aimed to circumvent that by forcing students to walk through metal detectors and use biometric fingerprint and face recognition technology to verify their identities, according to Reuters. Drones were deployed to identify potential instances of cheating from above. Cellphone signal-blocking technology was also used to ensure students could not seek outside help.

Though these solutions sound extreme, so have the means by which test-takers have worked to defraud state education authorities. Test-taking proxies used to impersonate students has been a problem for years, a scheme that was also being used by Chinese students taking American tests in order to study abroad.

The test itself is grueling, can take up to three days to complete, and is the only factor used in determining students’ admission acceptance. Its intensity has inspired “cram schools,” and its memorization-heavy contents is something students begin preparing for as soon as they enter the education system.

In China, the penalty for being caught cheating can be severe — up to seven years in prison. Ahead of the test, over 50 students and their accomplices accused of attempting to cheat were arrested.