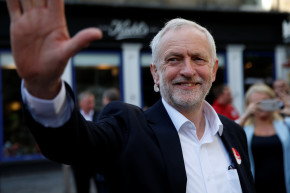 How Jeremy Corbyn Is Winning The Social Media Race

Although Jeremy Corbyn is slightly behind in the polls heading into Thursday’s British election, the leader of the British Labour Party remains miles ahead of Prime Minister Theresa May in social media influence. Corbyn, who has run a campaign that has clawed its way out of a 20-point deficit in the polls, has used his massive social media presence to help close the gap on May.

Much like we saw with the 2016 campaign of President Donald Trump, social media influence has catapulted Corbyn in the lead-up to Thursday’s election. In a breakdown between the official Facebook pages of Corbyn and May, there’s a distinct difference in social media outreach. Between April 19 and May 6, the the Corbyn campaign’s 259 posts averaged more than 10,400 likes and 4,000 shares, far outpacing the May campaign’s 62 posts, which averaged close to 4,800 likes and a little more than 1,000 shares. Of those posts, Corbyn included video 139 times compared to the 29 videos from May.

As Corbyn’s political fortunes have risen, so has the size of his Facebook following. In fact, an analysis of British likes on Corbyn’s Facebook page shows a nearly perfect positive correlation of .966 between the amount of likes and his rising popularity in the polls. During the time Corbyn has closed the gap on May, he’s added more than 209,000 likes from British users. In comparison, May’s numbers have remained largely stagnant, with her Facebook likes among British users growing by only about 43,000 during that same period.

Corbyn is active and dominant on Twitter, too. Through Wednesday morning, his account has tweeted 675 times since the election was approved, while May’s account has only tweeted 72 times during that time. The increased social media activity echoes a recent study by the London School of Economics and Political Science that found the Labour Party’s supporters are far more active on Twitter than those backing May’s Conservative Party. LSE’s analysis of almost 10 million tweets concerning the election showed that #VoteLabour was the most prominent hashtag within its collection.

While this social media advantage may not manifest in victory on Thursday, Corbyn’s social media campaign and his activist followers have helped to disseminate the message and energize Labour voters ahead of the election. As with the Trump campaign, it may just help give him the edge he needs to manage an upset victory.