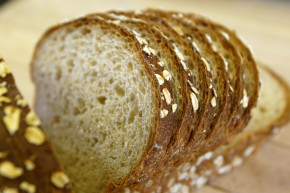 Which is healthier for you: bagged, processed white bread, or artisanal wheat sourdough? It might seem like the answer is obvious, yet a small new study suggests otherwise. It might not be the nutritional content of food that determines what’s good for you, but rather the microbes in your gut.

Researchers at Israel’s Weizmann Institute of Science had 20 participants spend a week eating either the white or the wheat bread as 25 percent of their entire diet, then had them switch breads. As they explain in the latest issue of Cell Metabolism, they measured a bunch of potential health effects — including fat and cholesterol levels, inflammation and tissue damage, and levels of essential minerals — in the participants to see how they changed when on the two bread-heavy diets. They expected the sourdough would show greater nutritional value, but the initial results showed neither bread had any effect whatsoever.

Even that wasn’t quite right, though the researchers had to do a bit of digging to find out the truth. About half the participants’ bodies showed better responses to the white bread, while the other half responded more favorably to the wheat. Taken as a whole, it looked like switching between the two bread diets made no difference at all, but considering each result individually suggested 20 unique dietary responses.

According to the researchers, the different responses are driven by what’s known as the microbiome, the teeming universe of microbes inside people’s guts.

No two humans’ microbiomes are exactly the same, and these tiny companion organisms can have a profound — and still largely not understood — effect on how our bodies respond to different foods. What’s healthy to one person might be less healthy to another, because of these bacteria. The paper argues this study illustrates why universal dietary guidelines don’t really work. Even if one type of bread is theoretically healthier than another, all other things being equal, the massive variation in people’s microbiomes means that all other things are never equals.

The results are intriguing, but they shouldn’t be taken as proof of much of anything. After all, this is a tiny study, with just 20 participants gorging on two different types of bread for a week each. Nutritional science has plenty of holes, but a study like this can at best only take the tiniest of first steps in filling them in.