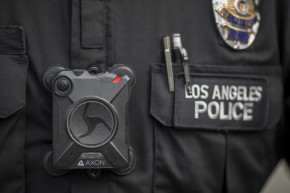 The racial disparities in how cops treat people run much deeper than the headlines about police shootings of unarmed people of color. A new study using body camera footage from nearly 1,000 traffic stops finds cops are consistently more disrespectful to black people compared to white people.

More Police Body Cameras Reduce Use Of Force, If Cops Can’t Turn Them Off

The researchers created transcripts of the stops so that their study participants could judge the respectfulness of the interactions without knowing the race or identities of both police officer and  driver. Presented with the raw dialogue, the participants judged the officer’s response on a bunch of different criteria. The biggest difference was in terms of respect, but the cops’ treatment of black people was also found to be less friendly, less polite, less formal, and less impartial. A second study found similar results using a statistical model to judge the respectfulness of all of the more than 30,000 individual utterances from the cops during those traffic stops.

These relationships held true even after the researchers controlled for factors like the driver’s age or gender, the officer’s race, the severity of the traffic offense, where the stop occurred, or what the ultimate outcome of the interaction was. Statistically speaking, the difference was pretty much entirely driven by the race of the person the police officer had pulled over.