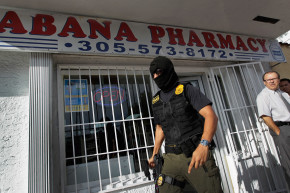 The DEA’s Investigation Of The NFL Is Headed Nowhere

In 2014, the Drug Enforcement Administration conducted surprise inspections of the offices of multiple NFL teams, as part of an investigation into the use of painkillers by NFL teams. The investigation itself began in response to a class action lawsuit filed by 1,800 former players, alleging that, for years, NFL teams recklessly dispensed anti-inflammatory medication and other controlled substances. (A majority of the charges were dismissed by the presiding judge in May and the plaintiffs have since appealed the ruling.)

But according to a report in the Washington Post, the feds seems to be cool with letting the NFL handle the issue internally without much in the way of oversight. In a meeting at DEA headquarters in March, an unnamed group of NFL representatives assured investigators that the days in which team athletic trainers doled out Toradol and Vicodin like Halloween treats, hauling them from state to state in violation federal guidelines, were long gone. All 32 teams now follow a league-mandated “compliance plan,” though what the exact nature of that plan is and how it is being enforced remain unclear.

Here’s the DEA’s summation of the March meeting with the NFL, via the Washington Post:

“Currently, DEA is unaware of any new evidence that the NFL member teams travel with controlled substance across state lines,” the DEA official wrote to four Democratic members of the House Energy and Commerce Committee in a letter dated May 24. “And additionally, as of the fall 2015, DEA was advised that NFL team physicians no longer store inventory of controlled substances at NFL facilities.”

The meeting itself would not have occurred without a modicum of pressure exerted by Democrats on the House Energy and Commerce Committee, which has been bugging the DEA for clarification. From the NFL’s perspective, it couldn’t have hoped for a better statement, considering the DEA didn’t delve into specifics or respond to the questions posed by lawmakers in March, after documents in the painkiller lawsuit were unsealed, as first reported by the Washington Post and Deadspin.

As Derek Helling noted at FanSided, every scrap of documentation about the league’s medical practices has come from the NFL itself, using the kind of lawyerly, purposely vague language you’d expect from a multi-billion-dollar industry that requires massive doses of painkillers to keep its employees on the field.

A 12-page letter sent by the NFL to lawmakers in April, which asserted that the league has been hard at work trying to fix the problem since 2011 and has abided by the rules of the Controlled Substances Act as they understood it, follows this exact pattern: The league didn’t provide any information about how the NFL is ensuring compliance and maintaining proper records, while touting the “world-class doctors” and “expert medical care” that NFL players receive.

How much Toradol is being ingested by the 32 teams, Congress asked in the April letter. The NFL won’t or can’t say, other than to say that the amount differs from team to team. If nothing else, the NFL does know why it can’t cough up the correct data, though they’re loathe to admit it.

One document, previously unreported, is titled “NFL Prescription Drug Advisory Committee Major Findings and Recommendations,” an internal summary document from 2014 that noted “substantial variation exists in reported prescribing behaviors” among its teams. It said drugs were administered and dispensed by people other than physicians and non-players also were being prescribed controlled substances.

It also found that “a correlation between prescribing behaviors and injuries could not be determined.”

Has the DEA uncovered further evidence and is the agency continuing to investigate? If so, they don’t seem to be inclined to make that information public. Not yet anyway. Frank Pallone Jr., the ranking Democrat on the Energy and Commerce Committee told the Post that “much more needs to be done to ensure that teams are prioritizing the health and safety of their players, and that they are informed about the risks and side effects of any drugs they are given.”

What has been made abundantly clear is that without serious governmental oversight or a few wins by former players in court, the NFL will continue to act in its own best interests and declare the problem solved, regardless of whether it’s true.