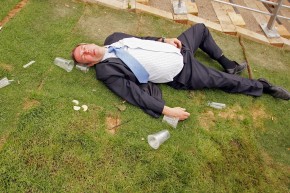 No birth controls ads though, because the NFL is the best at hypocrisy

The NFL will no longer ban liquor advertising during its games, according to a Wall Street Journal report, ending one apparent inconsistency on its list of sanctioned sponsors. However, making sense of the rest of the allowable advertisers is an exercise in cognitive dissonance.

The end of the liquor prohibition is technically a one-year trial, but an anonymous league executive hinted to the Journal that the change is expected to be permanent. While beer is a longtime backer—with Anheuser-Busch InBev the named official sponsor—liquor commercials did not air on television through 1996, Ad Age noted, with the NFL as the last holdout from permitting spirits on its airwaves.

Not surprisingly, this move is accompanied by some important statistics from the trade publication: namely, that in the last 13 years, beer’s share of the alcohol market has fallen from 58 percent to 50, while liquor has climbed from 28 to 32 percent. Also, the Journal reported a Kantar Media figure that spirit companies spent $411 million on advertising last year, so surely the NFL wants a piece of a growing market with a nine-figure ad expenditure.

Drawing a distinction between beer and liquor was arbitrary anyway, although liquor will have to contend with some restrictions. No more than four 30-second spots can be played during any NFL game, with an additional two in pre- and postgame shows; also, there must be a “prominent social responsibility message” and 20 percent of all ads during the season must “consist exclusively of social responsibility messaging,” Ad Age noted.

While this seems like a fairly normal and expected business move, most fascinating is the Wall Street Journal’s reported list of sponsors that remain taboo because of vices, perceived and otherwise.

The Raiders are set to move to Las Vegas in a few years yet, for now, commercials for hotels that offer gambling are strictly prohibited, as are tourism ads for places that allow gambling—in other words, football broadcasters can’t run ads enticing fans to visit what will soon be one of the NFL’s own host cities. The league’s official stance on gambling hasn’t changed, but ads for lotteries and horse tracks are allowed.

Furthermore, the Journal writes that ads for Viagara, Cialis, and other erectile dysfunction products are fine and dandy (and viewers are inundated with them during games) yet all forms of birth control, including condoms, are against the rules.

These NFL policies lack any kind of holistic consistency. It’s a private company and can choose to make no sense, of course, but one would hope no football fan relies on the league for their morality lessons—for many reasons, of course, including its dizzying array of mixed messages.