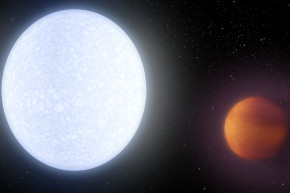 Scientists Explore The Least Habitable Planet In The Galaxy

Artist illustration of star KELT-9 and its super-heated planet KELT-9b — Robert Hurt / NASA/JPL-Caltech
By Alasdair Wilkins
Jun 05, 2017 at 11:08 AM ET

The last few years of planet-hunting have brought incredible discoveries, as astronomers have spotted worlds orbiting other stars with similar size, position, and temperature as our world. We haven’t yet confirmed any planets outside our solar system are actually habitable, but there could be billions of Earth-like worlds out there in our galaxy. And then there’s the newly discovered monstrosity KELT-9b, which is hotter than most stars. Meet the least habitable planet in the galaxy — or at least that we know about.

Not that anyone will be packing up to take a trip there anytime soon, but this gas giant is 650 light-years away, in the constellation Cygnus. At its hottest, the planet reaches temperatures of nearly 8,000 degrees Fahrenheit, which is only a couple thousand degrees cooler than the surface of our sun. The planet’s own star is possibly the hottest star yet discovered to have a planetary system. About 2.5 times the size of our sun, the star has a temperature of about 18,000 degrees, and the planet is in prime position to soak up as much of that heat as it can.

As an international team of astronomers explain in the latest issue of Nature, the planet is so close to its star that it orbits every 1.5 days. Its orbit is tidally locked, meaning it has a day side that’s always pointed toward the star. That side roasts in the direct glare of the star, at temperatures so hot that even basic molecules like water and carbon dioxide likely couldn’t form or survive.

This is a young star system, likely only about 300 million years old. Not that the planet has billions of years of existence to look forward to as Earth does: The ultraviolet radiation of its parent star could totally evaporate the planet even before the star expands and engulfs it in a few hundred million years. To steal a line from Thomas Hobbes, KELT-9b’s existence figures to be nasty, brutish, and short.

But the astronomers say this planet is more than just a cosmic curiosity. As we learn about what kind of stars form solar systems with habitable planets, it’s also important to understand how the universe’s least habitable planets come to be.

The emphasis on habitable exoplanets has led astronomers to focus on potential systems around stars like our suns or smaller red dwarfs. A planet like KELT-9b gives astronomers a chance to explore the other extreme, to see what happens when planets form around much hotter, more massive stars. At least in this planet’s case, what happens can really only be described as hell.