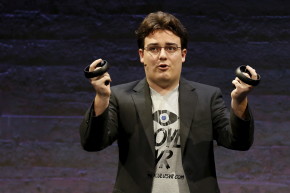 The Tech Titans Pushing For A ‘Virtual’ Border Wall

Border surveillance technologies are having a revival

President Trump’s proposed U.S.-Mexico border wall may or may not ever get built, but that doesn’t mean a “virtual border wall” — an idea some of his supporters see as more feasible — isn’t also a boondoggle waiting to happen.

The New York Times reported on Sunday that the controversial founder of virtual reality company Oculus, Palmer Luckey, is working on a startup that would develop technologies to patrol U.S. borders with sensors, cameras, lidar, and AI-powered software — all technologies similar to those used in self-driving cars. According to the publication, Luckey has already met with the administration and has the backing of another Silicon Valley Trump supporter, Peter Thiel.

The administration has been pushing for more technology to police the border. The Department of Homeland Security has been inundated with bids to supply small drones to federal border agents. DHS says the drones should be equipped with facial recognition and are intended to track people on foot or in vehicles from three miles away, according to a request for proposals cited by NBC News in May. They would supplement the larger Predator B drones already operated by the agency.

In Arizona, a portion of a “virtual” wall is already taking shape. According to NextGov, DHS is spending $145 million to install six towers in Arizona, equipped with video cameras and sensors on the look out for human trafficking and drug smuggling. An Israeli company won the contract in 2014, in part due to its experience developing that country’s border wall technology.

The concept of a virtual “wall” dates back decades, at least to the Vietnam War. The Arizona initiative is what’s left after the Obama administration canceled a much larger effort to build up border surveillance technology in 2011 (though the effort still cost $1 billion). A 28-mile test of the concept, which involved nine surveillance towers built by Boeing, was plagued by mismanagement and technical difficulties in the harsh desert environment. Digital surveillance also didn’t seem to achieve the desired effect either: One study showed previous efforts using border surveillance technologies between 1998 and 2005 rarely led to arrests.

Camera, sensor, and image recognition technologies have obviously advanced a lot since the 2000s. But building a metaphorical border wall with technology isn’t as straightforward as it might seem, and defense contractors like Boeing and Lockheed Martin have been involved in these efforts for years.

That, of course, won’t stop Trump’s supporters from trying to “disrupt” this industry and speed up the pace of research and development. For example, one Fort Worth company is pushing its idea for an improved border sensor network to Congress.

Luckey apparently believes he can do better. “We are spending more than ever on defense technology, yet the pace of innovation has been slowing for decades,” he told the New York Times in a statement. “We need a new kind of defense company, one that will save taxpayer dollars while creating superior technology to keep our troops and citizens safer.”