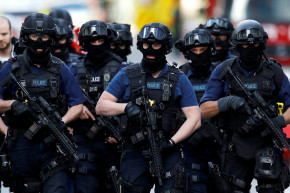 Armed police officers walk near Borough Market after a terror attack in London. — REUTERS
By Jacob Steinblatt and Shira Rubin
Jun 06, 2017 at 4:15 AM ET

British activists are advocating for looser gun laws in response to the Saturday night ISIS terror attack that killed eight people and wounded nearly fifty others in central London.

“These tragedies may have been the eye opener to just how ineffective our laws are,” Dave Ewing, a representative from the gun ownership advocacy group, Firearms-UK, told Vocativ.

Firearms-UK, along with other advocacy groups like Arm UK Citizens, Legalise Guns in the UK, and England Wants Its Guns Back, have flocked to social media to slam the British government for maintaining harsh restrictions on gun ownership in response to the attack at London Bridge, which was the third terror attack on British soil in as many months.

They accuse the government of leaving its citizens exposed to violent terrorists and criminals, while politicians enjoy “24 hour armed bodyguards protecting them while they continue to sell the lie that firearms are not suitable for personal protection,” said a Firearms-UK Facebook post published in the wake of the London Bridge attack.

Gun ownership is heavily restricted in Britain and is among the tightest in Europe. After a school shooting that killed 15 children and their teacher in 1996, the British government legislated bans on assault rifles and handguns and heightened background checks for other types of firearms. Illicit gun ownership is also relatively low in Britain, which does not have the porous borders of its neighbors.

The British “gun rights” movement, therefore, remains fringe when compared to the U.S., where carrying guns is enshrined in the constitutional Second Amendment. British gun advocates call for modest reforms to gun laws that would allow the government to retain strict oversight on gun ownership, extensive background checks and mandatory weapons training, but would still permit gun owners to use their weapons in self-defense.

Ewing, from Firearms-UK, said that his movement has gained steady momentum as it’s moved online, where British members can connect and communicate with their many American counterparts who are eager to push their pro-gun agenda abroad.

Many Brits, and their American supporters, were outraged when after the Saturday attack, police sent out a tweet warning people in the area to run, hide, then call authorities. Officers at the scene also shouted at bystanders to disperse, a response that security experts say likely saved lives.

“In the US you are advised to Run, hide FIGHT if you are attacked. In the UK it is run, hide, tell and this shows just how the authorities care so little for us.  We are not running from school bullys, we are not all able to run or hide and might not have time to tell [sic],” read a recent post on the Firearms-UK Facebook page. One commenter posted a Texas-produced instructional video on surviving an active shooter event.

“I’m very fond of my country’s oldest, staunchest ally, and I’m sick to the back of my teeth of watching thugs commit these atrocities with impunity” said an American who said he carried concealed weapons, writing in the closed Facebook group England Wants Its Guns Back. “Y’all have what it takes, in admirable quantity, to prevail against these fanatics. Your government merely needs to stop throttling it to death.”