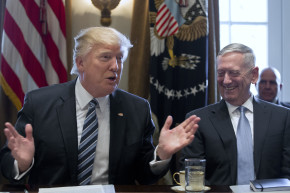 Military Opposes Trump On Climate, But Don’t Count On Them To Save Us
By Alasdair Wilkins

Military Opposes Trump On Climate, But Don’t Count On Them To Save Us

President Donald Trump’s announcement Thursday that the United States would exit the Paris climate agreement reportedly came after a major showdown between rival factions in his administration. On the losing side was Defense Secretary James Mattis, who has previously said that climate change is real and a threat to national security.

America’s national security apparatus — which includes the Pentagon, the State Department, the intelligence community, and the Department of Homeland Security — has long recognized climate change is real because it can’t afford to ignore it.  Yet what became clear this week is that even the conservative Pentagon isn’t an effective check on Republican-led climate denial.

“Climate change is impacting stability in areas of the world where our troops are operating today,” Mattis wrote in unpublished testimony to the Senate Armed Services Committee, pointing to how a thawing Arctic or increase in droughts could affect military strategy.

As Trump indicated with his line Thursday that he was elected by the voters of Pittsburgh, not Paris, he did not take such a global view of the climate agreement. Rather, he aligned himself with the economic nationalism of White House adviser Steve Bannon and the anti-regulation creed of EPA chief Scott Pruitt.

“The problem is that those who seem to be driving this, not just Trump himself, but those at the EPA, are putting this issue in a tiny little domestic environmental box,” Francesco Femia, co-president of the Center for Climate and Security, told Vocativ. “And you can’t put it in that box. It has much larger implications for the U.S. in terms of national security and global security.”

The actual impact of the Paris exit on greenhouse gas emissions remains largely hypothetical, especially when state and local leaders have said they will abide by the agreement in defiance of the White House. The more immediate issue, according to Femia, may be America’s ability to project power and influence throughout the world in the wake of what the international community views as a reckless policy reversal. This is likely another reason Mattis and Secretary of State Rex Tillerson reportedly opposed leaving the agreement.

Femia said it was unfortunate that climate change has largely been framed as an environmental issue instead of a matter of security.  “Were the president to fully grasp that and to be concerned about national security, as he claims to be,” he said, “it would behoove him to take the advice of defense, intelligence, and diplomatic circles in making these decisions.”

Nick Buxton, a researcher for the social justice-focused Transnational Institute who edited a 2015 book on how the military shapes climate policy, takes a more skeptical view of the security argument. He pointed out President Obama frequently made just this argument in an effort to get Republicans on board, yet it didn’t succeed in getting Trump to change his mind on the Paris agreement. And making climate change action all about national security shifts the focus away from those who are at the greatest risk from global warming.

“The questions become: ‘How do we secure what we’ve got? How do we keep the military operating smoothly? How do we ensure that corporations will continue to operate through shipping chains?'” Buxton told Vocativ. None of these questions provide solutions, instead just trying to keep a lid on existing problems. Buxton argued real change on global warming will require an emphasis on climate justice and global cooperation.

None of that is in the Pentagon’s job description, and it’s in no real position to be a leader in fighting climate change. A 2012 report found it is the single largest consumer of petroleum on the planet, using an estimated 100 million barrels of oil each year. Not that this would have been affected by exit from the Paris agreement, which excludes military emissions from its targets. The exemption is a legacy of the Kyoto Protocol, as the United States pushed for it to appease foreign policy hawks before George W. Bush ultimately decided not to ratify the agreement.

To Buxton, the climate realism of Mattis and others is motivated by a duty to protect American military interests. Mattis’ stated interest in moving to renewable energy when appropriate could do some good, but the military’s massive supply chain is still entirely petroleum-dependent.

This is where Femia and Buxton do agree: the Pentagon and other parts of the American security apparatus will continue to be science- and data-driven in its approach to climate change, simply because it can’t take the risk of ignoring reality. The extra billions Trump wants to spend on the military may help keep climate research going through this era of denial.

It’s just that all that work will be filtered through the prism of security.

“It’s the armed lifeboat strategy,” Buxton said, referencing a term coined by investigative journalist Christian Parenti. “You just build lifeboats, but you can only rescue a few people and you shoot everyone else. That’s not the kind of world that anyone wants to live in. But in the current Trump administration, that’s the shape it will take.”