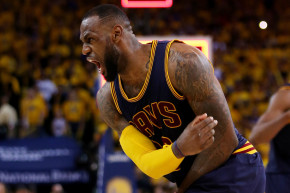 Literally any economist worth a damn will tell you otherwise

The American Enterprise Institute, a conservative think tank that pays neocon idiots like John Bolton to advocate for total war and offered $10,000 to scientists willing to pose as climate change truthers, has some thoughts on LeBron James, job creator.

Every economist worth a damn has dismissed the idea that James serves a rising tide that lifts all financial boats, but somehow, this information has eluded Vox. On Thursday, the site Voxsplained an AEI study conducted by Daniel Shoag and Stan Veuger which examined the impact James has had on businesses near Quicken Loans Arena since he returned to Cleveland in 2014 .

“Specifically, his presence increased the number of restaurants within 1 mile of a stadium by about 12.8% and the number of eating and drinking establishments by about 13.7%… and employment by about 23.5%” the study said. The further you travel from the Q, the numbers dwindled, such that outside of a seven mile-radius, bars and restaurants saw little to no financial gains.

This is factually correct. Attendance at the arena soared as the Cavs went from a pitiful, LeBron-free roster to a team packed with stars that has made three straight trips to the NBA Finals. Those same fans are eating and drinking more before, after, and during the games, but nowhere in the Vox blog nor in the study itself do they account for the Substitution Effect.

In brief, just because more money is being spent on food and beverages (and Cavs tickets), doesn’t mean those dollars would be safely tucked away under a fan’s mattress if James had taken his talents elsewhere. Rather, that money would go towards any other number of entertainment and/or dining options diffused throughout the greater Cleveland area. Like an economic pie, there isn’t any growth; just a change in the way it’s sliced and parceled out. Vox’s Dylan Scott, who admits that he’s a Cavs fan, either was unaware or chose to ignore this outright, writing,“LeBron James… is also a historic force at creating … jobs.”

That’s just not true, nor is the accompanying headline, “LeBron James means a lot to Cleveland — and its economy.”

James has boosted one tiny segment of the Cleveland economy while deflating others. As the noted sports stadium economist Victor Matheson told Quartz while debunking the claim that LeBron James’s free agency decision would add an additional $500 million a year to Cleveland’s economy, if you own a bar or restaurant near the Q, “It is an awesome time.” Overall, though, James’s financial impact is negligible.

A bad blog is one thing, but Scott takes it a step further. He does mention that “economic impact” studies – like team-funded studies written by pseudo-economists using made-up data – serve as a key talking point for those in favor of stadium subsidies and tax breaks, and notes that most economists have pointed out how and why those studies are inaccurate at best, a position that AEI itself held a decade ago. But then Scott pivots to this:

But a generational talent and cultural phenom like James? In the downtowns where he plies his trade, the economic benefits he brings are very real.

Wherever the three-time NBA champion goes, businesses and jobs follow.

There is zero merit to championing “economic benefits” and “jobs” without framing it a zero-sum financial game for Cleveland unless Scott’s goal is to imply that if a team boasts one of the two best players in basketball history, taxpayers dollars should go into the pockets of billionaire team owners. And, somehow, the fact that Miami bars and restaurants didn’t see a significant drop-off in the year after James ditched South Beach isn’t important to Scott. The study suggests two possible reasons for this:

“Perhaps Mr. James is particularly beloved in his native Ohio. Or maybe “superstar amenities” are substitutes, not complements, and Miami has plenty of them even without Mr. James, generating fiercer competition and an attenuated impact of any specific superstar.”

Shockingly, Scott surmises that it’s the former. (Again, Scott is a Cavs fan.) While smooching James makes for a cute kicker to his blog, what’s so nefarious here is that you can draw a straight line between this kind of thinking and gifting Dan Gilbert $70 million to refurbish the Q. It’s an appeal to raw emotion and unthinking fandom, even if the readily available facts say otherwise.