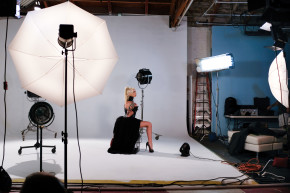 Change in the industry has been slow, but legendary Wicked Pictures just shot its first scene with transgender performers, and some are calling it a historic moment

This particular scene is for a splashy, big-budget showcase film for the popular, award-winning cisgender star jessica drake, who has never before worked with trans performers (and who also asks that her name is written in lower-case). The adult industry generally treats all porn featuring transgender stars as part of a small and edgy niche, often categorized with derogatory terms like “tranny” and “shemale.” That is despite these categories being incredibly popular and marketed to straight, cisgender men. Trans stars would normally never share the spotlight in a major feature film, and it’s typically seen as taboo — and potentially career damaging — for “mainstream” performers like drake to work with trans co-stars.

“Today is definitely a groundbreaking moment,” says Lux. “This is a huge privilege.”

Venus Lux poses for photos before shooting her scene

Since signing on for this scene, directed by Brad Armstrong, word has spread in the industry, and drake has heard whispers of people essentially saying, as she puts it, “Oh, wow, aren’t you afraid that other people won’t work with you now?” — even though Wicked requires both testing and condoms on its shoots.

She originally brought up the idea for this scene, which features her and three trans women, to Wicked three years ago. “They were like, ‘Are you sure?'” she says of the initial pushback she received. There were concerns about whether it would appeal to the traditional Wicked audience, how retailers and distributors would react, and whether it would have, as she puts it, “repercussions.” But she didn’t just want to do a scene with trans co-stars, she wanted to include it in a mainstream feature, and without explicitly labeling it as a “trans” scene.

“I don’t want to quote-unquote ‘warn’ the viewer because I think that when you do something like that you’re feeding into the assumption that there is something peculiar about this scene,” she says on-set, while a hairstylist teases her hair and applies blonde extensions. “If they see something they don’t like then, hey, fast-forward.”

‘I never thought this could happen’

Adam Grayson, chief financial officer at Evil Angel — which is known for award-winning, as the industry often terms it, “transsexual” content — argues that it’s unlikely that Wicked’s typical audience member will be drawn to this scene. “Porn consumers tend to have one or a few different genres that they stick to,” he says. “It’s a very different audience, at least from my perception.” But in the last few years, he has seen a couple of A-list stars who have performed with trans co-stars — including Adriana Chechik, one of the very top performers in the industry right now. Still, it’s a rarity.

Domino Presley, one of drake’s co-stars, clad in a black fishnet top, says she is frustrated by the tendency to keep trans porn entirely separate from mainstream heterosexual content. “They want to label everything, put us in a box,” she says while waiting to shoot some glamor shots. This is in part, she argues, because of straight men’s insecurity about their sexuality — or, one might argue, homophobia. “God forbid a guy is attracted to a trans woman and thinks he’s gay,” she says. As for this Wicked shoot, she says, “I never thought this would happen while I was in the industry.”

The aim of including this scene in a mainstream showcase scene, says drake, is to send a message to her fans: “Question everything you think you know about sexuality.”

Buck Angel, a longtime transgender performer, says he’s suddenly gotten interest from mainstream companies in just the last year. He also just recently became the first trans man to film a showcase, a feature film in which he stars in all of the scenes. The work is welcome, of course, but it also feels long overdue.

“Why has it taken until now for this to happen, when I’ve been doing my work since 2001, and not one of those companies would touch me? Why now all of a sudden are we getting these opportunities?” Lux suspects it has something to do with the greater visibility of transgender people in pop culture, what with the rise of celebrities like Caitlyn Jenner and Laverne Cox. “[It’s] thrown the word transgender into people’s vocabulary recently,” she says.

In recent years, much as with cisgender female performers, the pool of transgender talent has started to look somewhat more diverse and less restricted to a particular archetype. “There’s a lot more diversity of depictions,” says Grayson. “It’s not nearly as narrow as it used to be.” At least one brand-new company, TransSensual, has begun filming features with bigger budgets and fully developed storylines.

In 2014, Poe publicly campaigned for the industry to stop using terms like “shemale.” As she wrote in an xoJane essay, “If there wasn’t a trans woman being murdered every 36 hours I think the argument of ‘It’s just a word’ could be valid, but when our sisters are being murdered I believe these terms which are further de-humanizing add to the lack of worth society puts on trans bodies.”

But shoots like this one with drake remain the exception to the rule. “This is very elaborate — in the trans world, we don’t have elaborate sets like this or a crew of fifteen people,” says Lux. Trans performers are typically limited to working with a very small number of producers, which means that their income and longtime career prospects are limited. They also have fewer opportunities to shift into other roles within the industry. “A lot of the money is still in cisgender power,” says Lux.

While Poe says it’s great that trans performers are getting more mainstream opportunities, like the Wicked shoot, she questions just how much progress it actually represents.