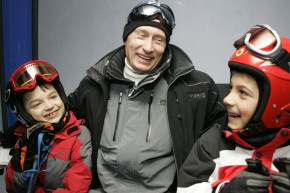 Russia Wants The 2028 Olympics, Which: LOL
By Joe Lemire

Russia Wants The 2028 Olympics, Which: LOL

Despite the looming possibility of suspensions and bans, Russia is still out here talking wild

Just as Los Angeles mayor Eric Garcetti hinted that there had been discussions with the International Olympic Committee for Paris to receive the 2024 Summer Games and his city to be awarded the 2028 Games in return for youth sports funding, the president of Russia’s Olympic Committee, Alexander Zhukov, said his country “potentially” has interest in hosting the 2028 Games, continuing Russia’s apparent interest in interfering with domestic U.S. plans.

Zhukov said last October that he planned to step down from his role as ROC boss but, apparently, hasn’t and spoke to the state news agency TASS on Thursday in which he addressed speculation that the IOC may jointly award the 2024 and 2028 Games and called it “a purely hypothetical thing.” This reiterates a suggestion from January that one of several Russian cities—the list now includes Moscow, St. Petersburg, Sochi, and Kazan—would be able to hold such an event. IOC head Thomas Bach said he was unaware of Garcetti’s comments, which were made in a South California Public Radio interview, telling InsideTheGames only that there would have to be a vote on any decision. (It’s in his interest to keep all potential bidders alive, of course.)

So the plot thickens. Do you think Zhukov's comments (on his birthday BTW) are designed to complicate plans? https://t.co/pf5LZ0qdMu

The timing of that earlier comment from Zhukov indicating interesting in staging the Olympics was especially noteworthy, just a couple days after the Institute of National Anti-Doping Agencies called for Russia to be banned from hosting any international sporting event in the wake of its ongoing doping crisis. Joseph de Pencier, the INADO chief, told CNN, “Until they acknowledge their problems, until they show some contrition about what they’ve done to the sporting world [then] they really they ought not to be competing and their athletes ought not to be welcome at sporting events.”

The Russians have oscillated off-again, on-again, off-again, on-again on even acknowledging that the McLaren Report’s charge of a doping institutional conspiracy took place. Its Olympic contingent’s eligibility for the 2018 Winter Games—to be held in eight months—remains uncertain as the the country tries to reform its anti-doping program rapidly in accordance with instructions from the World Anti-Doping Agency. Because of Russia, WADA has even accelerated the approval of policies in order to assert the power to suspend an entire federation for flagrant violations.

Zhukov, meanwhile, has said the McLaren Report—which said more than 1,000 Russians had doped and that the 2012 Summer Games were “corrupted on an unprecedented scale”—“does not stand up to scrutiny” and claims Russia was unduly targeted. He expressed great concern in his comments to TASS about the consequences of a blanket ban of his nation’s athletes:

“It is a very dangerous thing which may cause a new rift in the Olympic Movement,” Zhukov said. “Boycotts and suspensions will lead nowhere as far as sports is concerned. So I am glad that the IOC has been preventing such attempts.”

Furthermore, Zhukov stated, “If we assume that Russia does not participate, then the world will neither witness an intense hockey tournament nor see our gorgeous figure skater Evgenia Medvedeva and many others.

“In this case, the Games will lack the entertainment value.

“As members of various organizations, we have been striving to ensure the unity of the Olympic Movement and its values for we believe it is a crime to try to turn sports into political weapons.”

The contribution of Russian athletes, if doping-free, undoubtedly would improve the Olympics but clearance should be done methodically. Just this week, the international track and field federation accepted only three of 31 applications it received from Russian athletes to return to international competition. Drug tests aren’t political—not like, say, showing growing interest of hosting an Olympics seemingly destined for a rival country.