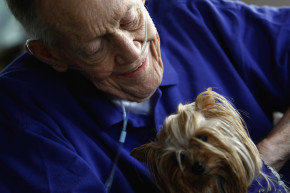 On January 5, 2014, Virginia resident Stuart Rakoff died from the degenerative nerve disease ALS. In the nine months before his death, Rakoff wrote a blog in which he chronicled his journey as his motor functions eroded, from being unable to drink without a straw to losing the ability to speak. Right up the end, though, his blog professed a positive outlook.

“Surrounded here by so much love and care I feel I am ready for the next step,” he wrote in a post published the day he died. He explained every movement required assistance and that even a full-time morphine pump did little to help with the pain. “I have no regrets at all – I have had a full life, touched and been touched by such wonderful family and friends. So if there is to be a final lesson for me it is that love is the ultimate gift — love and honesty.”

It’s that kind of positivity that led researchers at the University of North Carolina at Chapel Hill to investigate how people deal with the prospect of imminent death.

In a study published in the latest issue of Psychological Science, they compared blogs like Rakoff’s with posts written by participants asked to imagine they had mere months left to live. The hypothetical posts were considerably more negative than the actual ones, focusing on the anxiety and terror of death in a way the real blogs overwhelmingly didn’t. For those just imagining their impending demise, the experience tended to be a lonely, meaningless one, but terminally-ill patients often saw death as an opportunity to reconnect with what gave their lives the most meaning. Rakoff’s tribute to love, friends, and family was not unusual.

But the terminally ill do often get to spend their final days in the company of family, which sets them apart from another group who know their death is imminent: inmates on death row. Here again the reality is more positive than that imagined by study participants, based on a sample of last statements released by the Texas Department of Justice.

Kimberly McCarthy wanted to thank all who supported her over the years. Ramon Hernandez asked to “tell everyone I love them” and offered words of encouragement to those still on death row. Richard Cobb’s last words read almost as the mirror image of Stuart Rakoff’s: “Life is too short,” he said just before his execution on April 26, 2013. “I hope that anyone that has negative energy towards me will resolve that. Life is too short to harbor feelings of hatred and anger.

While some inmates were defiant, and others professed their innocence, many of those who accepted their guilt used their last words to ask forgiveness, thank loved ones, and acknowledge how religion had helped them find meaning. Again the researchers found that those imagining inmates’ final words were on average far more negative than those who actually had been minutes away from death.

According to the researchers, this speaks to how adaptive humans are. Death might be terrifying as an abstraction but becomes just something to deal with when it’s a concrete fact of life. The two studies suggest people underrate their ability to come to terms with death, whether it’s at the hands of disease or the state. When given time to prepare for their demise, both those on death row and the terminally ill focused not on what was ahead but what had come before.

“I am so grateful for the messages of support I have received from readers of this blog,” Rakoff wrote in the final section of his last blog post before his death. “I will soon be at peace, my struggles past. But I will be here in spirit to help strengthen each of you in your lives. So if you here a little voice whispering ‘Love,’ know it is me.”