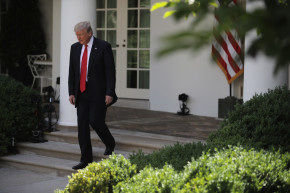 Trump Announces US Withdrawal From Paris Agreement
By Ethan Harfenist

President Donald Trump announced on Wednesday that the United States was officially pulling its commitment to the Paris climate agreement, a potentially monumental shakeup in the global effort to address climate change. Announcing his decision from the White House Rose Garden, Trump and Vice President Mike Pence promised that the decision to pull American support for the Paris accord, the 195-nation agreement on climate change made in 2015, would boost American jobs and help the “forgotten men and women” of the country.

“In order to fulfill my solemn duty to protect America and it citizens, the United States will withdraw from the Paris climate accord,” Trump said. He also said that the accord “disadvantages the U.S.” for the benefit of other nations and is “very unfair.” Trump added that although the country is withdrawing, he would try and negotiate a new deal that better serves the U.S.

As the New York Times reported, Trump pulling American support now may force other nations to reconsider their positions on the agreement, thus making the accord’s goal of limiting global warming that much more difficult. With the withdrawal, the U.S. now joins Syria and Nicaragua as the only other United Nations members to not support the agreement.

Given earlier reports saying the president was planning to pull the nation’s support of the agreement, Trump’s decision came with little suspense. Even when he was on the campaign trail, then-candidate Trump repeatedly vowed to tear up the agreement. Despite its predictability, Trump’s move drew ire from a cacophony of voices from both the private and public sectors.

As the world’s second-largest emitter of greenhouse gases behind only China, the U.S., and Trump’s withdrawal, will ultimately hurt the nation’s economy.

“By ditching the Paris accord, Trump turned his back on vast economic opportunities tied to curbing climate change, and the thousands of companies that implored him to stay committed to the deal,” Cathleen Kelly, a senior fellow with the energy and environment team at the Center for American Progress, told Vocativ. “[The move] undermines U.S. competitiveness, and cedes its share of the $1 trillion-plus clean energy market to competitors.“

Kelly added that Trump’s decision “resigns our kids to coping with the skyrocketing costs of more extreme weather fueled by climate change.”

More The U.S. Is About To Exit Paris Climate Deal. So How Screwed Are We?

Environmental activist Bill McKibben told the Guardian that it was “an incredibly stupid decision” that would isolate the U.S. from its friends around the world.

“It ranks right up there with the worst decisions in American political history,” he said prior to Trump’s official announcement. “There’s not a climate scientist in the world who thinks his arguments make sense.”

Florida Sen. Bill Nelson, who hails from one of the states most at risk of being profoundly impacted by the effects of climate change, aired concern about the American withdrawal.

“Sea-level rise caused by the Earth heating up is a real threat to Florida,” Nelson said in a statement to Politico on Wednesday. “If the U.S. isn’t going to do its part to combat climate change, then the rest of the world won’t do theirs and millions of Floridians living along the coast will be at risk.”

Tesla CEO Elon Musk said in a tweet on Wednesday that he would leave Trump’s council of advisers if the president pulled out. That same day, Marc Benioff, the CEO of cloud computing company Salesforce, tweeted a statement signed by several major corporations, urging Trump to keep the U.S. in the deal.

Dear President Trump, as some of the largest companies in the US, we strongly urge you to keep the US in the Paris Agreement. pic.twitter.com/ztSXyYtRrm

The hype surrounding Trump’s decision on the Paris accord started last week, with Trump butting heads with G7 leaders regarding the Paris agreement. He was the lone dissenter at the summit, reportedly threatening to undo the agreement signed by the Obama administration last year.

Seemingly taking a page from his reality-show playbook, Trump turned his decision into a series of Twitter cliffhangers before saying that he would make his landmark announcement Thursday. And it’s one that’s expected to have a lasting effect for years to come.