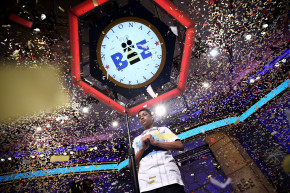 I don't even know anymore, man

Finally, at least two fantasy sports games have burbled up for those who can’t simply watch the 90th Scripps National Spelling Bee without some action on the side.

Per NBC’s Washington affiliate station, one such fantasy league was cobbled together amongst a group of online pals that had coalesced around a “Harry Potter YouTube community” (because of course they did) way back in 2009. The 12-team league has used the same format for the past five years, conducts a seven-speller draft, and then collects points for each round the speller reaches and the points they earn. On Wednesday and Thursday, they’ll all meet in an online video chat, and trash-talk each other like nobody’s business. Pretty standard fantasy league stuff.

And, like any fantasy league aficionado, the pre-draft research means the difference between winning and losing, though no actual money is wagered. Katie Twyman, one of the league’s founders, spends an inordinate amount of time poring over the various data points, possible predictive metrics, and conducting eye-test scouting reports.

To pick her dream team of spellers, Twyman, a 25-year-old college student, studied how the children performed in previous bees and if they have siblings who competed. If a sibling did well, the speller’s family may have a good studying method in place, she said.

But even though Twyman describes the Spelling Bee as a, “combination of charming and sweet and surprisingly intense,” she and the other 11 league owners still need to get hammered, pounding shots if any speller ticks off a gif-able or particularly viral moment, like dabbing.

Other liver-poisoning events include the failure to recognize a dad-worthy joke from Dr. Jacques Bailly, the Bee’s official pronouncer, who is known to drop the occasional dry one-liner, when the camera cuts to one of the speller’s beaming family members seated in the audience, if a sad kid bails after biffing a word, and so on.

Aside from the fact that Twyman and her online chums are going to be dealing with a serious hangover Friday morning, it’s cute, right? Kind of like an adorable duck who enjoys drinking milkshakes.

Meet the Shelton Family. They also play in a six-team fantasy spelling league, and while their scoring system isn’t as intricate, they’ve added a couple of twists.

Namely, they try to guess if the winner is sporting a pre-pubescent mustache, wears glasses and/or braces, and is home-schooled. Yes, let’s mock these kids, who, no matter how seriously you take all this, put in grueling hours of work to prepare, give up vast chunks of a normal childhood, and are competing under terrible stress while their helicopter parents spend a lot of cash on training. Cool stuff, Shelton clan. They’re nerds, sure, but these dorks possess a dedication and competitive streak that most Americans cannot fathom, and that kind of mockery is just too rich, especially coming from a country in which adults struggle to spell their home state correctly.

Twyman, at least, is aware of this. “We can usually keep up until the semifinals, but then the words are way over our heads,” she said.

The finals of the Scripps National Spelling Bee will be broadcast Thursday night at 8:30 pm on ESPN.