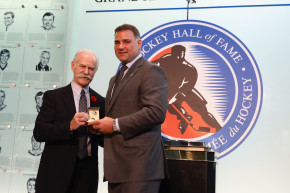 The Hockey Hall of Famer, whose career was curtailed by concussions, makes a good point

Eric Lindros made his NHL debut as a 19-year-old with the Philadelphia Flyers in 1992 and immediately became the sport’s most prolifically precocious scorer. In his first two seasons, he scored 85 goals in 126 games, a per-game rate that bested the output of the legendary Wayne Gretzky at that age (albeit only at the third decimal place).

In that second season, I had the pleasure of seeing him play a road game in Hartford in which he scored two goals and added two assists—in the first period. By his third season, Lindros was league MVP. As historically productive as Lindros was, however, he had trouble staying on the ice. He suffered at least six concussions between 1998 and 2000, effectively derailing his career.

On the day he retired in 2007, he donated $5 million to an Ontario hospital and now is campaigning to keep youth hockey players from the same exposure to head trauma he endured. Earlier this week, Lindros campaigned to eliminate body checking from youth and less intensive levels of hockey. While Hockey Canada has banned checking under the age of 13, Lindros doesn’t think that goes far enough, noting that not every youngster matures and reaches puberty at the same age and stressing that only the elite development players (the “triple A” level) even need those skills.

“Why are we even hitting if you are playing single A or double A hockey and you are 16 or 17 years old?” Lindros said, according to the Toronto Star.

Lindros made these remarks at a media availability commemorating the one-year anniversary of Rowan’s Law, a Canadian initiative that improves concussion policies and education after a 17-year-old rugby player died after suffering two concussions in a week.

And youth concussions are an epidemic. The nonprofit Fair Health released research last year indicating that reported concussions—and the awareness to report them has risen in that time frame, too—from American children and young adults under the age of 22 increased 500 percent from 2010 to 2014, with the largest preponderance in September and October. One can assume that most of those are due to the start of football season, although many states play soccer in the fall and headers pose a sufficient risk that U.S. programs eliminated headers under age 12. It’s likely that a comparable Canadian study would find a similar uptick during hockey season.

There’s no denying the impact of concussions and head trauma, particularly among youth. One study of 25 youth football players between the ages of eight and 13 found neurological changes at the completion of one season even without any reported concussions; the cumulative toll of sub-concussive hits was enough to make an impact. The brain isn’t fully developed until somewhere between the ages of 18 and 25, which is part of the reason Dr. Bennet Omalu—the famed neurosurgeon whose landmark research initiated the current heightened concussion awareness—penned a New York Times op-ed under the provocative headline, “Don’t Let Kids Play Football.”

Hockey stands apart from football in having the ability to reduce concussion risk because the contact is a less intrinsic component of the sport. Football without tackling is flag football, but hockey without checking works well in the women’s game and, to many observers, is a more fun, fluid, fast-paced sport when not bogged down by too much contact. The New Jersey Devils’ neutral-zone trap was so effective that the league implemented stricter penalty rules to limit contact and make the game more appealing.

And Lindros is exactly right: what’s to gain from teenagers still physically developing from checking each other, especially when one boy may have hit his growth spurt before another? There’s especially little value in subjecting young players to such contact when they aren’t on a trajectory that might net them NHL riches. Keeping children safe should be an obvious goal.