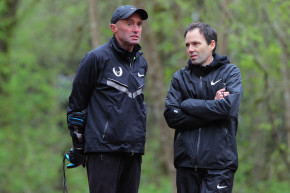 While no doping charges have been brought against Nike, the evidence is mounting

Soon after an extensive U.S. Anti-Doping Agency interim report documented “highly likely” allegations of doping violations by Nike’s Oregon Project, a joint BBC/ProPublica report presented what appears to be a falsified medical record of what treatment was offered to an assistant coach.

Nike has long tried to assert its place at the forefront of elite distance running, with a recent attempt at breaking the two-hour marathon threshold (it narrowly failed in a tightly controlled setting) and through the Oregon Project’s sponsorship of a cadre of elite runners—including Olympic champion Mo Farah and American record-holder Galen Rupp—under coach Alberto Salazar, a three-time New York Marathon winner in the 1980s who also won the Boston Marathon in 1982.

That group, however, has been plagued with doping allegations against both the letter and the spirit of the sport for four years, with claims that a retained endocrinologist, Dr. Jeffrey Brown, over-prescribed thyroid medication in an effort to boost testosterone levels and, thus, performance; that therapeutic use exemptions were abused so that runners could take otherwise banned drugs like asthma inhalers; and that injections of a legal substance, L-carnitine, may have exceeded set limits or at least, in the words of the London Sunday Times, “skirted the spirit of the sport.” (What appears to be the full USADA interim report, apparently obtained by the Russian Fancy Bears hackers, was published by FloTrack.)

The New York Times account says that assistant coach Steve Magness was “the chosen guinea pig” for the L-carnitine infusion and later claimed that its performance boost was “almost unbelievable.” When Salazar allegedly asked runner Dathan Ritzenhein to try the treatment—Ritzenhein was also reportedly feeling unwell from apparently superfluous thyroid medication—the runner responded, “Is this legal? This doesn’t sound legal.”

Magness later became an Oregon Project whistleblower in a previous BBC/ProPublica collaboration alleging doping violations by Salazar and provided the media outlets his medical records from that infusion. His copy of the file is missing check marks denoting types of examinations done on him during that visit; the accusation is that the administration of L-carnitine, which converts fat into energy, was done as part of a comprehensive exam. (The Times story recounts discrepancies in Ritzenhein’s records.)

“Without proper checks, it might look like he was prioritizing a company—Nike, Salazar—that was paying him over the health of his patient,” Magness told BBC/ProPublica.

Salazar, Brown, and the runners have all consistently denied wrongdoing. Salazar wrote an extensive open letter in 2015 and has said, “The Oregon Project will never permit doping.” A lawyer for Brown, Joan Lucci Bain, wrote to BBC/ProPublica this week that USADA was “essentially using the press to spread its own ‘fake news.’”

The Oregonian’s Ken Goe reviewed the entire USADA report and concluded that it lacked “a smoking gun” although “the sheer volume of circumstantial evidence presented in the report is impressive.” A summary written by LetsRun.com, however, concludes that “USADA presents strong evidence” that runners receiving L-carnitine injections “committed anti-doping violations.”

Not only are these allegations bad publicity for Nike, but also the USADA document includes accusations that the sportswear empire tried “stonewalling” the investigation, as Der Spiegel put it, with an investigator saying Nike was making “unreasonable demands.” (Nike disputed that characterization, saying in a statement that it “voluntarily cooperated.”)

The latest report would seem to add more credence to the voluminous investigative work compiled by USADA already. So far no doping charges have been brought forward but, if they are, it would rock both Nike and the distance-running world.