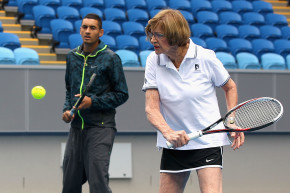 Over the last two decades, former women’s tennis great Margaret Court has gone from a vocal – if bigoted – critic of gay marriage to a conspiracy-mongering hateful loon.

On Wednesday, the former world No. 1 made an appearance on a Christian radio program and claimed that women’s tennis is “full of lesbians” who are part of an international cabal secretly working to turn kids gay in service of the devil, while operating in a manner similar to that of the Communists and Hitler. Seriously.

Last week, in an open letter to the West Australian, 74-year old Court threatened to boycott Quantas Airlines, after its CEO, Alan Joyce, said he supported gay marriage. In response, a slew of current and former tennis stars, including Martina Navratilova and Billie Jean King, both of whom have criticized Court’s homophobia in the past, as well as Andy Murray, singer Ryan Adams, and Australian pro Casey Dellacqua called for the Margaret Court Arena in Melbourne, which hosts matches during the Australian Open, to be renamed. Other tennis stars went so far as to threaten a boycott.

Tennis Australia, the sport’s governing body, issued a tepid statement saying it did not agree with Court’s views, and Australian Prime Minister Malcolm Turnbull dismissed the idea of a name change, saying that despite her public comments, the arena should continue to bear her name solely based on her accomplishments as a player.

But in an appearance on Vision Christian Radio, Court, who currently serves as a pastor of the Victory Life Centre in Perth, Australia, lost her goddamn mind. For starters, though she never addressed how she’d made this determination – and considering Court’s long-time religious views, it’s hard to imagine why any LGTBQ people would want to openly discuss their sexual preferences with her – Court claimed that lesbians have taken over the sport and are now warping the minds of young women on the cusp of turning pro.

As transcribed by the Sydney Morning Herald:

“When I was playing there was only a couple [of lesbians],” Court said.

“But those couple that led took young ones into parties and things. What you get at the top is often what you’ll get right through that sport.”

Court also alleged, again, based on nothing but the archaic, fear-driven ideas rattling around in her head, that “92 per cent” of people who identify as gay do so as a result of some form of emotional or sexual abuse. But this isn’t simply a matter of sinfulness, a willingness to submit to “lust for the flesh” and defying the word of God, as Court described it; it’s a vast, multi-tentacled conspiracy and everyone’s in on it.

In the face of polls that show 65 per cent of Australians support gay marriage, Court said: “We know the statistics are very, very wrong. They’re after our young ones, that’s what they’re after.”

Oh, and trans people’s very existence is Satan’s handiwork too.

“If you feel like being a girl, you can dress like a girl,” mused Court. “What confusion to a child. I get confused talking about it. You can think, ‘I’m a boy’, and it affects your emotions and feelings and everything else. That’s all the devil.”

It’s all so tired and sad, if you want to charitable. A scared woman clings to hateful bigotry as a way to remain relevant, sees any criticism of her nonsense as “bullying,” as she described the response to her Quantas boycott, and thinks she should be able to spout off about a subject she clearly knows nothing about. All while denying the basic humanity of those whose sexuality deviates in the slightest from her own. Time to go away, Ms. Court.