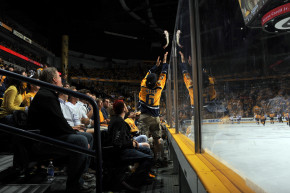 The Nashville Predators’ Catfish-Throwing Fan Could Go To Jail

This is all very stupid

During the Pittsburgh Penguins 5-3 win over the Nashville Predators in the opening game of the Stanley Cup Finals, one rowdy fan chucked a dead catfish onto the ice. It’s a playoff tradition in Nashville, one that dates back to 2003, per the Tennessean, but for Jake Waddell, a Predators fan who traveled all the way from Tennessee to Pittsburgh and went to exorbitant lengths to conceal a rotting fish in his underwear, there may be a serious price to pay.

Not only was he ejected from the arena and arrested, but Waddell faces a potential jail sentence of more than six years and a $12,800 fine. For throwing a fish.

Now, the Mayors of Pittsburgh and Nashville have weighed in with a mix of cheap puns and mock indignation, because there’s nothing like a championship event to bring out some bad kayfabe from the local pols.

As to how Waddell managed to smuggle a giant hunk of inedible food in his drawers, Sean Gentile of the Pittsburgh Post-Gazette went to the trouble of transcribing an interview that Waddell conducted with The Midday 180, a three-hour sports talk radio gab-fest on WGFX, a Nashville station that, with a wink and a nod, has been doing its own part to both suborn Waddell’s love of team and possibly keep him out of the slammer. (We’ll get there in a sec)

Waddell, who describes himself as a “dumb redneck with a bad idea,” said that the clever scheme popped into his head during a Memorial Day weekend spent in Ohio visiting his in-laws.

Yes, it would. Problem is, the catfish he purchased in Nashville – because he felt going farm-to-rink would be “more original” – needed to be doused in Old Spice cologne to conceal the growing scent and then reconfigured in order to elude arena security.

On game night, he took the fish to his cousin’s house, filleted it, cut out half the spine and ran it over with his truck. That made it easier to vacuum-pack and conceal … but not that easy.

The mashed, decaying catfish still didn’t fit in his boots (because giant fish head) so he decided to cram it into his underwear. He put on a single pair, followed by the catfish, then donned compression sorts to keep the it place. After adding yet another pair of underwear and some large, roomy pants, he was able to conceal the fish. In order to give his many-layered costume a test drive, he chatted up his in-laws for 20 minutes. They didn’t notice a thing.

At the arena with the weapon of mass fish properly concealed, all he had to do was make his way down to the front row and let fly. Check it out:

Security quickly nabbed Waddell and dragged him away. While in custody, the Pittsburgh cops threw the book at him, charging him with “Possessing instruments of crime,” (the fish) and “disrupting meetings and processions,” (the game itself) which is why he could see prison time and a dent in his wallet.

“The cop told me, to my face, ‘You are being charged with disorderly conduct. You will get a ticket, a citation in the mail.’ … That’s what I was told. Now they come out with a couple other trumped-up charges, which are BS. I mean, a catfish isn’t an instrument of whatever-the-hell-they’re-saying-it-was, and I didn’t disrupt a meeting. It was an athletic event.”

Not to be outdone, Pittsburgh Mayor Bill Peduto had some jokes.

But note the shirt Waddell is wearing in the above video. Why yes, that is a The Midday 180 tee he’s got on. Odd that. The program is also selling catfish-emblazoned t-shirts to commemorate this seminal moment in Tennessee sports history, is cranking out some fine catfish-based content, and one of the show’s producers wished him luck prior to the whole fish-flinging episode.

Waddell insists the stunt was entirely of his own devising, but for what it’s worth, the station has promised to cover any and all fines he has to pay out, and Waddell also claims an army of Nashville-based lawyers have promised to take the case pro bono should it go that far.

Hopefully it won’t, because any municipality that actually goes ahead and wastes both the court’s and the taxpayers’ time and money prosecuting this silliness deserves to be pelted with far worse than stinky, dead sea creatures.

UPDATE: According to the PittsburghTribune-Review, all charges against Waddell have been dropped. ““Wow, that is awesome,” Waddell said when notified that his record had been cleared. “What a crazy couple of days.”