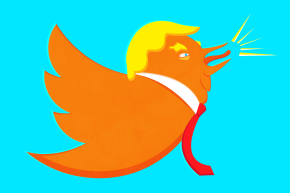 Nearly Half Of Trump’s Twitter Followers Seem To Be Phony

Fake followers are flocking to Trump, far more than Obama, Clinton, and Pence

If there’s one thing President Donald Trump likes to do, it’s tweeting. But all of his followers aren’t as genuine as his rants — an unprecedented number seem to be fake.

Out of Trump’s 31 million followers, nearly half of them aren’t real people, according to Twitter Audit, a tool that analyzes whether or not accounts are bots. That’s more fake followers than other presidential political figures. In contrast, 21% of former President Obama’s followers are fake, 39% for Hillary Clinton, 30% for Mitt Romney, and 11% for Bernie Sanders. Vice President Mike Pence has the fewest fake followers, with just 7%.

The recent discovery came after a tweet (which has been deleted) accused Trump of mysteriously gaining more than 5 million followers over Memorial weekend, an assertion that has already been debunked by BuzzFeed. Twitter confirmed that his account did not receive that many followers in just three days. Snapshots from archive.com show that Trump’s followers only went up from 30.7 million to 31 million.

However, Trump has had an influx in followers since he took office. Trump has gained more than 13 million followers since his inauguration in January. Social media followers are usually seen as a sign of popularity or societal importance. But the thing is that followers (either on Twitter or Instagram) can very easily be purchased, and spam ‘bots are also a common problem, especially for popular figures.

Accounts that follow Trump that are likely bots have no profile photo, unusual screen names, and were created within the last few months. Trump is likely attracting that many fake followers because of his status, since a year ago, his percentage of fake followers was much lower. Regardless, his ego will probably get hurt when he finds out.