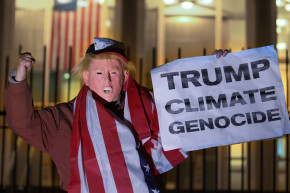 The U.S. Is About To Exit Paris Climate Deal. So How Screwed Are We?
By Allee Manning

The U.S. Is About To Exit Paris Climate Deal. So How Screwed Are We?

A man wearing a mask portraying President Donald Trump. — DANIEL LEAL-OLIVAS/AFP/Getty Images
By Allee Manning
May 31, 2017 at 11:54 AM ET

President Donald Trump has all but confirmed his decision to withdraw the nation’s commitment to the Paris climate agreement, which — he tweeted — he’ll announce Thursday afternoon. It’s something he has been flirting with for months, having used promises to “cancel” the agreement and dismantle the EPA as part of his presidential campaign strategy.

In doing so, Trump will put the U.S. in a global minority. The only other countries in the world that are not in support of the Paris Climate Agreement are Syria and Nicaragua. Nicaragua is expected to join, with delegates having used the reason that “voluntary commitments don’t work” for their initial refusal, and Syria has been embroiled in a six-year civil war. The agreement, formed at a UN convention in 2015, is a landmark pact for dealing with greenhouse gas emissions on a global scale. It aims regulate the global average temperature to within 2 degrees Celsius of warming.

Trump’s decision to leave the agreement will surely anger many members of the global community, including world leaders, environmentalists, and even some fossil fuel companies that wouldn’t mind certainty and international support for emissions reductions technologies.

UN Secretary General António Guterres recently called U.S. participation in the Paris climate agreement as being “essential” — which, to some degree, is true. While it has been celebrated in its historic mission, the emissions reductions set forth in the Paris accord are fragile goals that are very much based in good faith of all the countries participating.

The U.S. is one of the world’s top offenders when it comes to CO2 emissions from fossil fuel use and other industrial processes. This makes its cooperation in the agreement paramount to global success. Leaving would be essentially a middle finger salute to the other 195 countries represented in the agreement, most of which have less room for improvement. It could even result in world leaders imposing punitive carbon taxes on U.S. imports to their countries. Experts like Australian National University’s Climate Change Institute policy professor ­Mahendra Kuma say there is some concern that Trump’s decision could cause a ripple effect, with other countries choosing to leave the agreement.

But what exactly will happen in terms of environmental impact when Trump makes this power play? Initially, not much. The effects will not be apparent in the immediate future, as experts say it will take the U.S. four years before officially being able to withdraw and renewable energy use is on the upswing anyway. A future U.S. president could rejoin the treaty, so  there’s hope there.

One possible result is anger from the American public. The majority of Americans support the Paris accord, as per data from the Yale Program on Climate Change Communication. So the idea of having our nation’s support for it removed sends a symbolic message that could result in outcry from citizens.